Why didn’t the Sikh Gurus speak against certain evil practices unlike the Prophet Muhammad?

Some Muslims claim that Guru Sahib did not speak against “certain evil practices” which is completely false. Guru Sahib’s message clearly condemns the immoral and evil practices of the past and present time. This is because the divine message is based on principles which are the foundation of morality. Gurbani rejects idol worship, caste system, widow burning, abortion (female foeticide), subjugation of women and many other evil practices. Listing every evil practice is absurd because it makes the divine message dependent on time and place and becomes useless once the evil practice is abolished. This is why Gurbani is superior to Quran because it contains principles which are universal and independent of time and place.

It was Mohammad who, instead of stopping people from engaging in evil practices, advocated them and made them part of his own lifestyle and Islam. Polygamy, owning and raping slaves, dowry and paedophilia are some of the practices advocated by Mohammad. He also did not speak against caste system, burning of the widow, devdasi system, female foeticide and inequality of women. Quran greatly subjugates and mortifies women by taking away their personal rights and making them go through a humiliating and evil divorce process. They are degraded to the level of personal property.

Sex with children and Islam

The following Qur’anic verse allows sex with pre-pubescent girls who have not yet menstruated.

And (as for) those of your women who have despaired of menstruation, if you have a doubt, their prescribed time shall be three months, and of those too who have not had their courses; and (as for) the pregnant women, their prescribed time is that they lay down their burden; and whoever is careful of (his duty to) Allah He will make easy for him his affair.
Qur’an 65:4
What is being discussed is the Iddat (العدة‎), which is a waiting period a female must observe before she can remarry. According to this verse, the stipulated waiting period for a divorced girl who has not yet menstruated is three months.
It is said that the Prophet Muhammad married a child called Aisha, daughter of Abu Bakr. It is claimed this was done by the Prophet to build a stronger relationship with Abu Bakr, who later became the fourth Caliph. At the age of marriage she was six or seven, and the marriage was consummated (i.e. he had sex with her) when she turned the age of nine.

‘A’isha (Allah be pleased with her) reported that Allah’s Apostle (may peace be upon him) married her when she was seven years old, and he was taken to his house as a bride when she was nine, and her dolls were with her; and when he (the Holy Prophet) died she was eighteen years old.
Sahih Muslim 8:3311 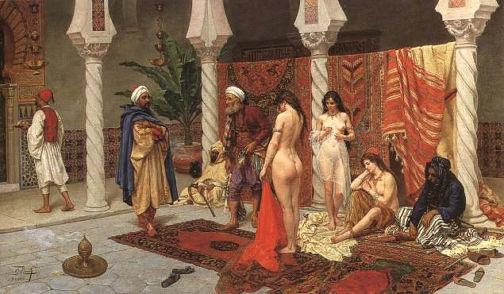 “Also (forbidden are) women already married, except those (captives and slaves) whom your right hands possess. Thus has Allâh ordained for you. All others are lawful…”
Qur’an 4:24 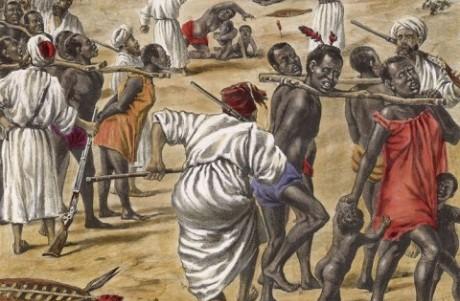 Narrated Abu Huraira: Allah’s Apostle said, “There is no Zakat either on a horse or a slave belonging to a Muslim”
Sahih Bukhari 2:24:542

Narrated Abu Huraira: Allah’s Apostle said, “A pious slave gets a double reward.” Abu Huraira added: By Him in Whose Hands my soul is but for Jihad (i.e. holy battles), Hajj, and my duty to serve my mother, I would have loved to die as a slave.
Sahih Bukhari 3:46:724

Jabir (Allah be pleased with him) reported that a man came to Allah’s Messenger (may peace be upon him) and said: I have a slave-girl who is our servant and she carries water for us and I have intercourse with her, but I do not want her to conceive. He said: Practise ‘azl, if you so like, but what is decreed for her will come to her. The person stayed back (for some time) and then came and said: The girl has become pregnant, whereupon he said: I told you what was decreed for her would come to her.
Sahih Muslim 8:3383

Who abstain from sex, Except with those joined to them in the marriage bond, or (the captives) whom their right hands possess,- for (in their case) they are free from blame,
Qur’an 23:5-6

“Abu Sirma said to Abu Sa’id al Khadri (Allah he pleased with him): 0 Abu Sa’id, did you hear Allah’s Messenger (may peace be upon him) mentioning al-‘azl? He said: Yes, and added: We went out with Allah’s Messenger (may peace be upon him) on the expedition to the Bi’l-Mustaliq and took captive some excellent Arab women; and we desired them, for we were suffering from the absence of our wives, (but at the same time) we also desired ransom for them. So we decided to have sexual intercourse with them but by observing ‘azl (Interruptus Coitus – Withdrawing the male sexual organ before emission of semen to avoid-conception). But we said: We are doing an act whereas Allah’s Messenger is amongst us; why not ask him? So we asked Allah’s Mes- senger (may peace be upon him), and he said: It does not matter if you do not do it, for every soul that is to be born up to the Day of Resurrection will be born.”
Sahih Muslim 8:3371

Narrated Mu’awiyah ibn Haydah: I said: Apostle of Allah, from whom should we conceal our private parts and to whom can we show? He replied: conceal your private parts except from your wife and from whom your right hands possess (slave-girls)… Abu Dawud 31:4006