Why are Sikhs vegetarians?

Negative affect on mind and body

Sikh’s do no eat meat, fish or eggs because such foods cause spiritual instability and have negative affects on the mind, spirit and body.

A few of the many health benefits of being Vegetarian: 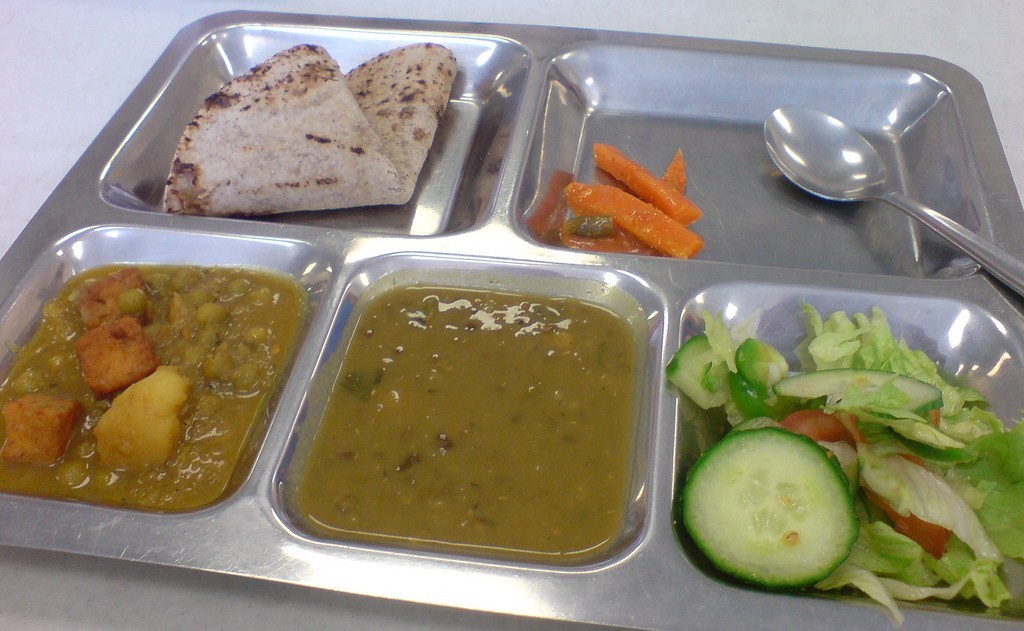 Eating any food obtained through tyranny, violence and oppression is considered sinful for a Sikh to eat and therefore killing animals for the purpose of eating them is considered a sin.

Compassion evaporates when one butchers and eats meat. A carrot may have life but it will never run away screaming when you go to the garden to get it. Guru Sahib is clear in Gurbani that life must sustain itself on life. There is no lack of mercy or daya (mercy) exercised when cutting a vegetable as it does not reacts to being cut. Contrast that with animals. These animals beg and cry and little calves cling to their mothers in terror when they sense they will be slaughtered.

ਅਠਸਠਿ ਤੀਰਥ ਸਗਲ ਪੁੰਨ ਜੀਅ ਦਇਆ ਪਰਵਾਨੁ ॥
“Rather than bathing at the sixty-eight sacred shrines of pilgrimage and the giving of charity – the most meritorious act that will be accepted by the Lord is showing compassion to all beings.”
(Ang 136)

Guru Nanak Dev Ji simply tells us that if blood stains our clothes are clothes become dirty and polluted, and the mind’s of the people who drink blood also becomes dirty. Therefore, blood is considered as unpleasant thing to drink. Blood can be obtained be killing any living being – whether man or animal through butchery, torture or slaughter. Guru Ji tells us that a cold-hearted person cannot maintain a pure mind, only a compassionate person can have a pure mind.

Plants have no nervous system. Plants are a life form that can’t feel pain – animals are not as such. The word “gardener” has no pejorative connotation. The word “butcher” on the other hand stands for someone who has no mercy. If one’s heart doesn’t melt at seeing the shrieks and anguish of animals, why would it matter when a human does the same? Why is it Muslims can do Halaal on humans? It’s because they have so much experience with animals that the jerking, gasping of dying animals and blood is something usual for them. A butcher will have the heart of a butcher. A butcher can never be a ‘Dharmee’ (spiritually pious) person.

When Guru Nanak Dev Jee travelled to Kurukshetra he met some Vaishnav Pandits who were staunch vegetarians and had such a disgust for flesh that they hated even the word meat, yet they had little or none (Gurmat) wisdom and Bhagti (meditation). Guru Ji enlightened the hypocritical Pandits that it is foolish to start bitter controversy over meat, as one cannot know whether there is sin in flesh (à¨®à¨¾à¨¸) or vegetables (à¨¸à¨¾à¨—).

In the true sense neither meat or vegetables are condemnable or sinful in itself. Actually the commendable is the tyranny, violence and evil means adopted in the act of obtaining the meat, driven by one’s lustful palate and is, thus, a sinful act. Even vegetarian food obtained through foul means of bribery, extortion and exploitation is deplorable:

At Malik Bhago’s feast, Guru Nanak Dev Ji refused to eat any of the food because it was prepared through wealth snatched from the poor by force. When one kills the living beings for obtaining meat, the blood virtually flows out and the use of tyranny and oppression is obvious. Such an action is considered sinful according to Gurbani:

Simply by avoiding meat as food no one can become holy person. One can become a religious person only by leading a pious life and simply by practising the rituals or by renouncing certain foods. Religion is far more deep and is about leading towards union with Vaheguru through Naam.

Other virtuous deeds, for example truthful living, contentment, compassion, non-attachment, good will towards others etc, are very essential and noble qualities of a person. However,their grace is enhanced only alongside Naam-Simran just as a marriage party looks glorious only in the company of the bridgegroom. In fact, all these virtures come only from Naam-Simran and without Naam-Simran they lose their significance because in that case they tend to create ego.

It is important to cultivate one or more of the above mentioned virtues. However, one can become a fully religious person only if they adhere to Naam-Simran, the most important basis of all the virtues. Without Naam-Simran, all the other qualities are reduced to false show. If a zero is placed after any numeral, its value is increased, but all alone it is a mere zero.

Guru Ji condemned people’s hypocrisy who believed that just by being vegetarian alone they were holier or purer than others yet their other actions were just as equal as to eating meat:

The source of holiness and piety is nothing else but NAAM. Without Naam-Simran one remains impure even if one performs all other so-called virtuous deeds specified above. Then, if a human being who is basically formed of blood and semen, contends that he is pious simply because of his avoidance of flesh and fish as food, that claim is absolutely false.