Who are ‘Nihang Singhs’?

Nihang (also: called Akalis) is a very famous and prestigious armed Sikh order. Early Sikh military history is dominated by the Akali Sikh military order particularly for many famous military victories won while often heavily out-numbered. The Akalis have historically been held in great affection and respect by Sikhs due the pivotal role they have played in Sikh history and Sikh military history in particular. It currently is mostly ceremonial due it being peace time but in times of war for the Sikh religion the Akalis have historically spear-headed the attack on the enemy.

“Nihang” is a Persian word meaning Crocodile. The invading Mughals said they fought ferociously like crocodiles that is where the term comes from.

The Nihangs were also known as Akalis. The term “Akali” is said to be derived from the Sanskrit Akal Purusha (Akal Purukh in Punjabi) – “the Timeless One”, a term for God. Thus ‘Akali’ translates as “Servitor of the Timeless God”. This term is not exclusively used for Nihangs but all Sikhs who have been on the forefront of activism and battling tyranny. The 20th century Gurdwara Reform Movement members were known also as “Akalis.” 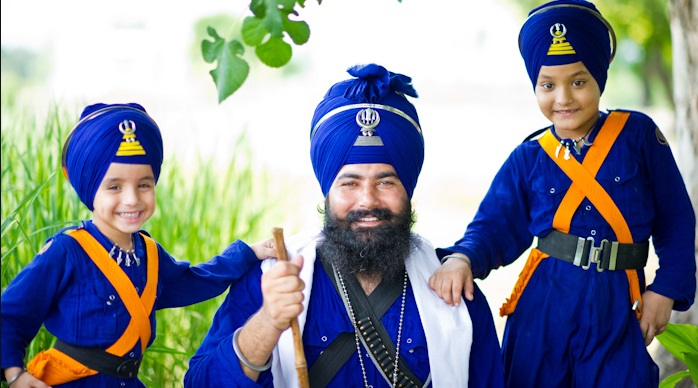 WHAT IS A NIHANG

Anyone who lives free from fear is called a ‘Nihang’. In Raag Aasa Guru Arjan dev Ji has described ‘Nihang’ in this very manner:

Nihang Singhs belong to a martial tradition begun by the Tenth Nanak, Guru Gobind Singh, that are like the “Boy Scouts” of Sikh Panth. Their way of life, style of dress, and weaponry has remained little changed since the Guru’s lifetime, 300 years ago. Today, some Sikhs see them as a relic of a time long past, but others recognize Nihangs as a colourful and important part of Sikh heritage.

Nihangs are a semi-nomadic people. They are organized into “armies” and live in camps known as “cantonments”. Men and women both train in horsemanship, swordsmanship, and in the Sikh martial art known as ‘gatka’. The Nihangs are the vanguards of the Sikh nation, who would leave their family occupations and village life with their extended families to engage in a vocation in life is to be warriors, protect the Gurdwaras and be on the forefront of battles. During times of persecution in the past, the Nihangs defended Sikh shrines and the Sikh way of life and become known for their bravery against all odds. In times of peace they travel to festivals and fairs throughout India, staging displays of horsemanship and martial skills. The annual Hola Mohalla fair held in Sri Anandpur Sahib on the festival of Vaisakhi is especially notable for the Nihangs’ colourful displays of pageantry.

Nihang Singhs are unattached to worldly materials. They wear blue clothes and tie a turban that is a foot thigh with a “dumaala” on top of it. They always keep several weapons like chakar, khanda etc. on them.

HISTORY OF THE ORIGINS OF ‘NIHANG SINGHS’

Though there is no concrete account of how the Nihangs came into being, it is told by many Singhs that one day the three Sahibzaadey (princes of Guru Gobind Singh Ji) were practising their battle skills, and the youngest of them all Baba Fateh Singh Ji also wanted to participate with his brothers. The other brothers replied: “At the moment you are too small.”

Baba Fateh Singhji felt so let down that he went inside the palace and tied a dastaar (turban) as tall as one hand. He put on a blue dress. Placing a Chakar (round disc carried on a belt or worn on the turban) on himself, he adorned himself with a small Khanda. Over his dastaar he wrapped a ‘dumalla’ and held in his hand a spear, and to complete his warrior’s wore his Kirpaan. He then went to where his brothers were playing and said, “Now I don’t look small.”

Observing him looking so handsome and beautiful, Guru Ji said: “From this dress the Nihangs will be formed.” For this reason up to this day Nihang Singhs are called ‘Guru Gobind Singh Ji’s Laddleeaa Faujaa(n) (Beloved Army)’. There a few a myths that suppose that Guru Gobind Singh Ji was impressed by Bhai Maha Singh’s dress, character and fighting skills and said, “You will have your own Panth”. However, this makes no sense. Would Guru Gobind Singh Ji want his Sikhs to follow the Guru’s Panth and path or follow the Panth and path of individual Sikhs? Therefore, logically, these myths can be dismissed.

Post-Baba Banda Singh Bahadur period (post 1716CE), during Nawab Bhai Kapur Singh’s leadership of the Dal Khalsa (Sikh confederation) in the mid-18th century, he divided the Sikh fighters into two sections – ‘Buddha Dal’ for the veterans and elders, and ‘Tarna Dal’ for the youthful. It was generally agreed that Buddha Dal would remain at Amritsar and manage the shrines, leaving Taruna Dal free for operations in the country.

THE CHARACTER & PERSONALITY OF ‘NIHANG SINGHS’

Guru Gobind Singh Ji said that the Nihangs will be generous, and strictly adhere to Dharma. When the sword is wielded, it will give out sparks like fireworks. Fighting in the battlefield in this way it will seem like a crocodile is coming out of the sea:

The Nihang Singhs were the image of spotless character:

They used to lead such an intrepid and unpredictable lifestyle that even their family did not know of their whereabouts. While riding or fighting they always uttered “Akaal, Akaal”. That is why they also become known as “Akaalis”. Their language (the distinct language of the Khalsa) indicated their positive (Chardikala) attitude. For example:

By merely wearing a blue chola (dress) and learning Shastar Vidhiya (the art of Sikh weaponry) does not make one a Nihang. Unfortunately, in recent years, many people who don’t follow the Khalsa rehat (way of life) strictly and lack good moral characters have brought shame to the ‘Nihang’s by falsely claiming to be Nihangs or by simply associating themselves to the Nihang Singhs. In particular, in the UK, a group of young Sikhs call themselves Nihangs on the basis that they look the part and know how to swing a Kirpaan, however upon closer inspection, they do not have the strict Rehat (disciplined way of life), Naam abhiyaas, knowledge, and Jeevan (spiritual life) of true Nihangs.

A number of modern Nihang Singhs observe some rituals and practices, which are contrary to Gurmat, for example the consumption of marijuana (‘bhang’). These customs and ‘traditions’ crept in to Nihangs during the period when the Mahants (Hindu caretakers) managed and maintained our Gurdwaras in 18th – early 20th century. During this period the Sikh religion was distorted and many non-Sikh practices infiltrated into the Sikh Panth. Those who follow these anti-gurmat practices claim that they are ‘old traditions’ (Puraatan Maryada) from the Guru’s time, however Gurbani sheds true light on whether these practices and observances are Gurmat (according to the guru’s teachings) or Manmat (self-willed). Reading and understanding Gurbani it becomes apparent that some distortions have entered the traditions of the Nihangs and the wider Sikh community.

‘Bhang’ or ‘Sukhnidhaan’, which is marijuana (cannabis) used by large number of Nihangs nowadays is often justified through various means such as the quoting of tales and stories and the claiming these to be ‘early traditions’. However, our Guru is eternal and with us forever. Why do we need to refer to stories and justifying traditions by claiming they are ‘old traditions’ passed down when we have Guru Granth Sahib Ji with us to tell us what is in accordance to Gurmat. Gurbani clearly condemns the consumption of marijuana. Furthermore, medical studies bear out that consumption of marijuana and cannabis on regular basis leads to schizophrenia, and mental problems such as memory loss. The sad fact is that nowadays if you go to India you can observe some Sikhs claiming to be Nihangs, who drink ‘Bhang’ have become mentally unstable.

Hearing this shabad, Babar called Guru Ji and asked him to sing it again. Guru Ji sang it again. Babar said, “Friends, he is a nice ‘Fakeer’ (Holy man).” Then, he offered ‘Bhang’ to Guru Ji and said, “O Saint, eat the ‘Bhang’.”

Guru Ji clearly says that ‘ਭਉ ਤੇਰਾ ਭਾਂਗ’ (Bhau Tera Bhaang), meaning ‘The Fear of You, Waheguru, is my marijuana (cannabis)’. Thus, Waheguru’s Fear is the true ‘Bhang’ for a Sikh. Reading this holy shabad, how can anyone say that Guru Ji accepted ‘Bhang’ and that he has not condemned it? If Guru Ji was pleased when Babar offered ‘Bhang’ to him, why did Guru Sahib not drink it? ‘Janam saakhi Bhai Bala’ does not state that Guru Ji drank ‘Bhang’, contrary to what some people claim in pursuit of defending their manmat practices.

Bhai Kahn Singh Ji beautifully describes the true character of an Akali as someone who associates themselves to Akal (the Immortal). This passage in particular is used relating to Nihang Singhs in the Gur Shabd Ratnaakar Mahaan Kosh (1931) :

In summary it can be concluded that Nihangs are the official army of the Sikh Panth, who are trained in Shastar Vidiya and live a life dedicated to serving the Sikh Panth through their battle skills. They are the Boy Scouts of the Sikhs whom Guru Gobind Singh Ji blessed to remain distinct and be fearless warriors like an official unpaid army without the desire of material gain.

The true Nihang Singhs who observe the Sikh Rehat Maryada (Sikh way of life) and keep a high moral character and serve to protect the Gurdwaras and the Sikh community should be given respect and acknowledged as the ‘Guru’s laddleeaa faujaan(n)’ (the Guru’s Beloved army). However, we should also be wary not to confuse Nihang Singhs for “Nangs”, impostors, who dress in blue attire, practice Shastar Vidiya (Sikh weaponry), follow ‘Sanaatan mat’ (ancient Hindu traditions and belief) and have little or no respect for living the Sikh Rehat and maintaining a high moral character. In particular, in the UK, the small group of people claiming to be ‘Nihang Singhs’ are teaching young Sikhs their own version of Sikh history and philosophy which is far from Gurbani’s teachings, have a lax approach to Sikh Rehat and justify using drugs, alcohol and other such things. Many of these “Nangs” are using the university scene and Sikh camps to spread their distorted version of Sikhi and confuse young Sikhs. Let us be aware of the distinction between a true Nihang and a “Nang” (fake Nihang Singh).

It would be false to label one group or section of Sikhs as the “Sikh Warriors” because Gurbani declares that who the true warriors are in this age:

Tyaar-bar-tyaar Gursikhs, irrespective of whether they have officially committed themselves to becoming a ‘Nihang’ and serving as vanguard of the Sikh nation, represent what the above Gurbani line means. By wearing weapons (shastar), physical appearance (bana), and tall towering turban (dumalla) does not make one a Nihang or warrior. True Nihang Singhs are fearless because they have mediated on the fearless Lord Waheguru and merged in Amrit-Naam, Gurbani, perform Sewa (selfless service) and maintain strict Rehat (spiritual discipline). The whole Panth should have the high moral character and Jeevan of the Nihangs stated in the article.