What is the Sikh view on the Christian belief of God sacrificing?

The Christians believe that God sacrificed his only son to wash away the sins of humanity. Whether the sins have since been washed or not is anybody’s guess. The strange thing is that God sacrificed his only son whereas the Devil escaped him even when every living creature was destroyed in the Noah’s flood. Devil outlived Adam, Jesus, and Noah. On the face of it Devil appears to be mightier than God and is perhaps immortal. If the Devil was sacrificed in place of Jesus, there would have no sin now. Nobody would deny that the Devil (if there is one) still exists and is instrumental in making us sinful.

Perhaps there is more sin in the world today than it was in the times of Jesus. If Jesus died for defending his principles and his philosophy then he was one of the greatest martyrs of the world but if he died for washing away the sins of humanity then he failed miserably. 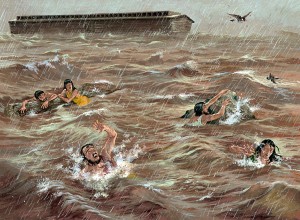 For a Sikh it is difficult to understand if death and resurrection were the only possible ways for God to cleanse the world of sin and He had to imprison Himself in the womb of a mortal for nine months.

According to Sikhi God is all powerful. His one word, nay even his Will, can wash away the sins of the whole world. The Sikhs believe that the greatest sacrifice for anybody is to wash his own sins by leading a pious life and to lay down his/her life for an approved good cause.
The Guru says,

ਮਰਣੁ ਮੁਣਸਾ ਸੂਰਿਆ ਹਕੁ ਹੈ ਜੋ ਹੋਇ ਮਰਨਿ ਪਰਵਾਣੋ || (ਪੰਨਾ ੫੭੯)
“The death of the brave heroes is blessed if they lay down their lives for approved good causes.”
(Ang 579)
It is on this principle that the fifth and the ninth Gurus of the Sikhs laid down their lives and the tenth Sikh Guru sacrificed his four sons.