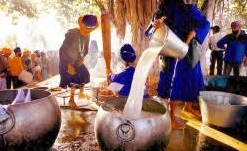 What is the Sikh attitude to marijuana (‘Bhang)? Many ‘Nihung Singhs’ consume this.

Bhang’ or ‘Sukhnidhaan’, which is marijuana (cannabis) used by large number of Nihangs nowadays is often justified through various means such as the quoting of tales and stories and the claiming these to be ‘early traditions’. However, our Guru is eternal and with us forever. Why do we need to refer to stories and justifying traditions by claiming they are ‘old traditions’ passed down when we have Guru Granth Sahib Ji with us to tell us what is in accordance to Gurmat. Gurbani clearly condemns the consumption of marijuana. Furthermore, medical studies bear out that consumption of marijuana and cannabis on regular basis leads to schizophrenia, and mental problems such as memory loss. The sad fact is that nowadays if you go to India you can observe some Sikhs claiming to be Nihangs, who drink ‘Bhang’ have become mentally unstable.

A number of modern ‘Nihang Singhs’ observe some rituals and practices, which are contrary to Gurmat, for example the consumption of marijuana (‘bhang’). These customs and ‘traditions’ crept in to Nihangs during the period when the Mahants (Hindu caretakers) managed and maintained our Gurdwaras in 18th to early 20th century. It is well known that devotees of Shiva eat Bhang and get intoxicated and also eat meat, later adopted by Sikhs that got confused in between the Sikh religion and Hinduism (known as ‘Sanaatanism’). During this period the Sikh religion was distorted and many non-Sikh practices infiltrated into the Sikh Panth. Those who follow these anti-gurmat practices claim that they are â€˜old traditions’ (Puraatan Maryada) from the Guru’s time, however Gurbani sheds true light on whether these practices and observances are Gurmat (according to the guru’s teachings) or Manmat (self-willed). Reading and understanding Gurbani it becomes apparent that some distortions have entered the traditions of the Nihangs and the wider Sikh community.

Hearing this shabad, Babar called Guru Ji and asked him to sing it again. Guru Ji sang it again. Babar said, “Friends, he is a nice ‘Fakeer’ (Holy man).” Then, he offered ‘Bhang’ to Guru Ji and said, “O Saint, eat the ‘Bhang’.”

Guru Ji clearly says that ‘ਭਉ ਤੇਰਾ ਭਾਂਗ’ (Bhau Tera Bhaang), meaning ‘The Fear of You, Waheguru, is my marijuana (cannabis)’. Thus, Waheguru’s Fear is the true ‘Bhang’ for a Sikh. Reading this holy shabad, how can anyone say that Guru Ji accepted ‘Bhang’ and that he has not condemned it? If Guru Ji was pleased when Babar offered ‘Bhang’ to him, why did Guru Sahib not drink it? ‘Janam saakhi Bhai Bala’ does not state that Guru Ji drank ‘Bhang’, contrary to what some people claim in pursuit of defending their manmat practices.