What is the Sikh attitude to dancing?

Dancing is a mode of entertainment in western countries. Sikhi applies the general test mentioned in Gurbani to any entertainment, namely:

“Avoid that which causes pain or harm to the body or produces evil thoughts in the mind.”
(Ang 16)

Dancing with partners of the opposite sex is likely to cause sensuous thoughts, for intimate bodily movement rouse the lower passions. Places where there is liquor, meat, and men & women dancing together to lured songs is strictly against Gurmat.

Following Rehat (disciplined living) leads us to experiencing and enjoying the benefits of Gurbani. Gurbani clearly states “Geeth” (ਗੀਤ), “Naad” (ਨਾਦ), and “Dhun” (ਧੁਨਿ). This incorporates all lyrics, all beats, all tunes of the faithless. If one is singing about the love of women, their caste, their wealth etc they are singing nonsense of faithless cynicism or what leads away from higher consciousness living in accordance to the Guru’s teachings. The Guru is clear in saying:

Sikhs expressing their joy and making their soul’s dance through Keertan (praising God).

The key to all singing should be the love Waheguru and Guru Sahib, and Naam and Bani is what leads us to the Divine. According to one’s spiritual ambitions and aspirations one chooses to live the way of the Guru. Someone who is focused on spiritually elevating their lives and wishes to live fully immersed in living in the Will of the Guru will express joy and pleasure through singing, listening and delving in the divine-bliss of Gurbani. On the other hand, those who wish to pick and choose aspects of Sikhi or do no aspire to achieve high spiritual consciousness will label Sikhs who do not dance or listen to music as fanatics.

There are religious dances which are performed by the Hindus (as for example Ras-Lila), and also by Muslim Sufi mystics. Such dances are not permitted in Sikhism. The Guru condemned religious dances or dances to please God or invoke divine blessings:

Gurbani describes dancing as ਮਨ ਕਾ ਚਾਉ (urge of the mind). A Sikh celebrates and marks happiness by pursuing the Guru’s wisdom and the Guru’s instruction rather than following what the mind says. The whole of Sri Guru Granth Sahib Ji directs us from moving away from our mind’s urges (known as Manmat) and follow the ideals of the Guru (Gurmat):

What the Guru permitted was ‘the dance of the mind’, and not of the body. The Guru says:

This kind of dance is the result of spiritual ecstasy, and is free from physical jerking and gymnastics.

Dances purely for the promotion of physical health or fitness are not taboo. For example, ‘Pentra’, a warrior dance to stretch the muscles before engaging in mock battle or martial arts display is part of Sikh tradition. 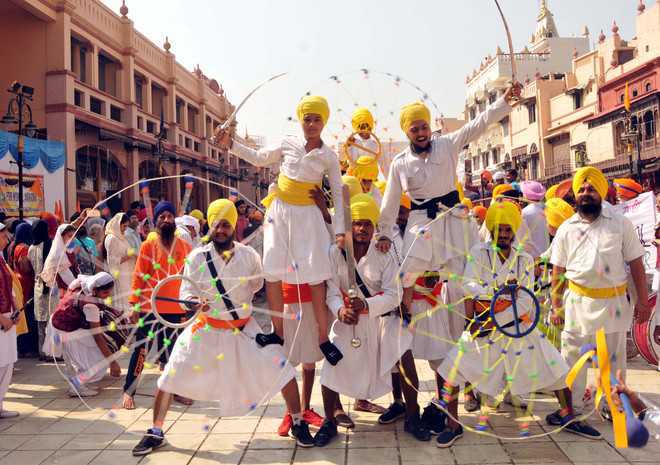