What is the legal standing on Sikhs wearing the Kirpan?

The Kirpan (Punjabi: ਕਿਰਪਾਨ, kirpān) is a religious sword worn in a strap that enables a it to be suspended near one’s waist or tucked inside one’s belt. It must be worn by all initiated Sikhs (Khalsa), after a mandatory religious commandment given by Guru Gobind Singh Ji (the tenth Sikh Guru) in 1699 CE. The Kirpan is part of the Five Ks uniform that all initiated Sikhs must adhere to. “Kirpan” literal means “weapon of defence” (“Kirpa” means “mercy” and “Aan” means “honour”) and encapsulates an initiated Sikh’s solemn obligation of courage and self-defence, as opposed to the talwar, a weapon of offence. A Sikh who wears a kirpan is not wearing it because it is a weapon; he or she is wearing it because it is part of their officially prescribed religious uniform.

The Khalsa is expected to live by the high moral standards of the Sikh Gurus at all times as stipulated in Guru Granth Sahib and Rehat Maryada (Sikh Code of Conduct) which includes such things as abstaining from smoking, drinking and other intoxicants, eating killed animals, performing daily prayers and always maintaining the five distinctive physical symbols of Sikhi (Kakars) on them. The most noticeable of these symbols being uncut hair (Kesh) and carrying the Kirpan.

Traditionally, Kirpans can be anywhere from 3 feet blade size as carried by Sikhs on religious festivals, marriages and parades, to just a few inches in length like the regular kirpan worn by devotees in the West. They can either be worn over ones clothing or underneath. The blade is normally constructed of mild steel or iron and the handle may be made of metal surrounded with leather or wood. The Kirpan is usually kept sheathed except when it is withdrawn from it’s casing on such occasions as consecration of the ceremonial sweet pudding distributed during religious ceremonies.

The law recognizes that religious freedom is primarily a matter of individual conscience and that it does carry with it the “freedom to manifest one’s religion, alone and in private, or in community with others, in public and within the circle of those whose faith one shares.” Indeed, the various forms that the manifestation of one’s religion or belief may take specifically include “practice and observance.” However, the Kirpan has faced some challenges in the West it has been argued that it is potentially dangerous and a health and safety risk.

One could argue that a knife is dangerous or that scissors are dangerous, but they are not inherently so. Hands may be dangerous. A knife may be used for cooking purposes, or it may be used to kill. Scissors may be used to cut paper in the classroom, or they may be used to kill. They rarely are. In the same way, our hands may be used to affect greetings, to eat our food, to embrace friends, or to strangle our foes. That does not make our hands inherently dangerous. Neither does it make our hands have an inherent essence, anymore than a pair of scissors do. The fact is that the meaning of an object can only be understood in context of its particular purpose and use. Outside its context, it is devoid of meaning. This is how Eastern thought views an object. The meaning of a kirpan can only be understood in the context of its religious, cultural, and historical use. Without this context, it is apt to be misunderstood as a conventional knife, dagger, or sword. Yet, it is none of these. To ban it on this basis is liberalism of the worst kind. It does nothing to promote individual freedoms—and certainly not the freedoms of individual believers. One might just as well ban knives in the kitchen, scissors in the classroom, or the use of our hands outside the home.

The reason that the Sikh kirpan is deemed unacceptable in these Western societies is that its contextual significance is not always appreciated in that society. Many choose to see it as nothing more than an ordinary blade or a dagger. Yet, the kirpan is not unique as an example of a manifestation of belief. It is imperative that the kirpan is not seen as intrinsically dangerous. This is because there is no evidence to support such a proposition. Authorities need to take positive steps to develop a better and more informed understanding of the kirpan as worn by devout Sikhs.

Article 25 of the Indian Constitution deems the carrying of ‘kirpan’ to be included in the profession of the Sikh religion[1], thus legalizing the carrying of kirpan by Sikhs. 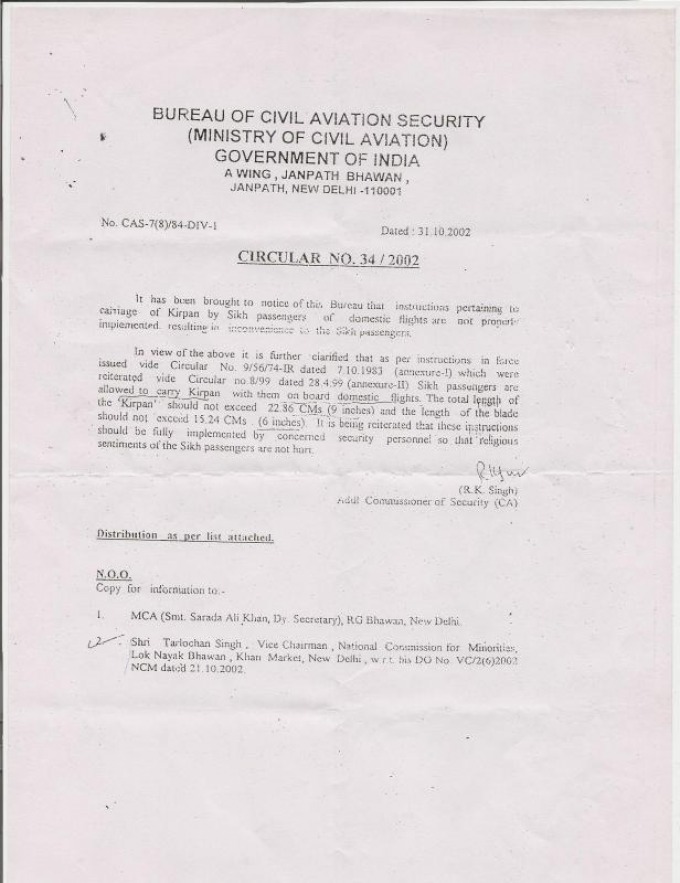 Letter from Aviation Authorities in India that allows Sikhs to wear a 6 inch Kirpan on domestic flights.

In the United Kingdom (Legal)

It is legal under the Criminal Justice Act 1988 (section 139) and Offensive Weapons Act 1996 (section 3 and 4) for a Sikh to carry a kirpan with a blade for religious reasons (other reasons allowed by the Act are cultural or work related reasons). The Criminal Justice Act 1988 safeguards the rights of the Sikhs to carry the Kirpan as it is deemed a necessary part of their religion.

In the USA (Legal) There have been several court cases in the USA relating to the legality of wearing a kirpan in public places. Courts in New York and Ohio have ruled that banning the wearing of a kirpan is unconstitutional.[2] In recent years the Sikh practice of wearing a kirpan has caused problems for security personnel at airports and other checkpoints. Security personnel may confiscate kirpans if they feel it is necessary, but are advised to treat them with respect.[3]

In most public places in Canada a Sikh religious Kirpan is allowed but there some places where it is not clear cut. In the 2006 Supreme Court of Canada decision of Multani v. Commission scolaire Margueriteâ€‘Bourgeoys the court held that the banning of the kirpan in a school environment is against Canada’s Charter of Rights and Freedoms as a reasonable accommodation. The issue started when a 12 year old student dropped a 20 cm (8 inches) long kirpan in school. School staff and parents were very concerned, and the student was required to attend school under police supervision until the court decision was reached.

In Sweden (Legal Conditional)
Swedish law has a ban on “street weapons” in public places that also includes knives unless used for hobby (for instance fishing) or profession (for instance a carpenter). Knives considered harmless, like a pocket knife, are allowed so a dull kirpan is allowed.[4][5]

In Denmark
On October 24, 2006, the Eastern High Court of Denmark upheld the earlier ruling of the Copenhagen City Court by which wearing of Kirpan by a Sikh was declared illegal. By this Denmark has become the first country in the World to pass such a ruling. Ripudaman Singh, who now works as a Scientist, was earlier convicted by the City Court for violating the Danish Weapons Law for publicly carrying a knife. He was fined 3000 Danish Kroner or an alternate imprisonment of 6 days. Though the High Court quashed this sentence, it maintained that the carrying of Kirpan by a Sikh is in violation of the Danish Weapons Law. The judgment stated, After all the information about the accused, the reason for the accused to possess a knife and the other circumstances of the case, such exceptional extenuating circumstances are found, that the punishment should be dropped, cf. Penal Code Â§ 83, 2nd period.

Danish Weapons Law allows carrying of knives in public places if it is for fishing, hunting, sports or any other purpose recognized as valid. The High Court did not find religion as being a valid reason for carrying kirpan. It stated that, For these reasons, as stated by the City Court, it is agreed that the circumstance of the accused carrying the knife as a Sikh, cannot be regarded as a similarly recognisable purpose, included in the decision for the exceptions in weapon law Â§ 4, par. 1, 1st period, second part.

European Law
The Sikhs right to wear a Kirpan is protected by Article 9 of the European Convention on Human Rights on freedom of religion.

Eurostar Train policy
Letter from Richard Brown, Eurostar Chief Executive Officer (10-07-2006):
“Our security arrangements at Eurostar are in effect determined by Transec, the Transport Security Division of the Department for Transport, under the Channel Tunnel Security Order. They are very similar to the arrangements in place at airports for the airline passengers.

In practice, therefore, our response will depend on the size of the Kirpan being carried, which do of course vary in size very considerably. In general any blade of three inches’ length or less is now permitted to by carried by passengers – provided this is not a flick knife or lock knife. Any longer than this, and a passenger is not allowed to carry the blade on them personally – but they can of course consign the item to registered luggage so that it is carried in a separate, locked compartment on the train. This would apply to a sword-length Kirpan, for instance.

My understanding is that many Kirpans are quite small.”
References


NEWS ABOUT KIRPAN
USEFUL DOCUMENTS REGARDING THE KIRPAN