What is the difference between the authorship of the Bible and Sri Guru Granth Sahib Ji?

The religious book of the Christians is called “The Bible”. It has two main parts.

(a) The old testament – a covenant or agreement between man and the God of the Jews
(b) The new testament – a collection of biographical sketches of Jesus and an interpretation of his philosophy as understood by his disciples.

The Old Testament
Most of the copies of the Old Testament were created (in Hebrew and Aramaic) before the advent of Jesus.25 They outline the life history and teachings of Moses and those of the tribes in the Eastern Mediterranean between 6000B.C and 100 AD. A number of versions were circulating therefore King Ptolemy Philadelphus (285-246 BC) collected them and employed seventy two translators. It resulted in 50 volumes. After the destruction of Jerusalem in 70 AD the Jews got all the sacred books collected into one volume and discarded the source material, which had come down from generation to generation. It was re-arranged and committed to writing once again around 135 AD when Rabbi Akiba was tortured to death and there was danger of it being lost.

Later a Christian scholar named Origin produced an edition called Septuagint in 245 AD giving six different versions in parallel columns. This came to be known as Hexapla (six versions). The present Bible now consists of 39 books, the first five of which are about the life of Moses and are known as ‘Pentateuch’. The Most important part is “Ten Commandments” which God is said to have literally handed over to Moses on a stone tablet. The books in the Old Testament range from 5th century BC. (I.e. Malachi) to 8th Century BC. (I.e. Amos, Isaiah, Micah, and Hosea etc.) .

The New Testament
The New Testament contains 27 books, which differ in detail among them, but nevertheless all talk about Jesus and other lesser prophets. The authors of most of these books are unknown. Some of these books had been written before 60 AD but Matthew was added probably between 65 and 75 AD. ‘Revelations’ was added in 95 AD. The Latin Vulgate version of St. Jerome (382 AD) and The Syriac version of Bishop Rabbula (411 AD) are considered by some to be the secondary sources which were destroyed by Turks in 1453 AD when they captured Constantinople. The first English version was the work of William Tyndale.

Scholz, a German scholar, made a catalogue of all available biblical material in 1830AD which runs up to 5000 manuscripts, all claimed by one scholar or the other to be part of the Bible .Carl Lachman and Tischendorf of Germany published yet more material afterwards in their Bibles in 1831AD and 1840AD. Westcott and Hart worked in a committee and published the English â€œRevised Version” in 1881-85AD on the lines of the Authorised Version caused to be prepared by King James in 1611AD.28American version of this appeared much later in 1901AD. Later its copyright was acquired by the International Council of Religious Education based in America.

Another Bible commonly known as Chester Beatty Papyri, was discovered in 1930AD buried in jars in the ruins of a church in Egypt and was published in series during 1933-37AD. One jar contained the four gospels and “The Acts’, another contained 12 Epistles of St. Paul which he wrote from Rome while in prison. And yet another contained books of Ezekiel, Daniel and Esther. Some scholars maintain that Codex Alexandrinus of Cyril Lucer29written on vellum in the first or second century AD is also a part of the Bible. Stephnaus, Mill, Wallace, Edward Wells, and William Mace published their own Bibles with additional material, which they claimed to be genuinely part of the Bible. Dead Sea scrolls discovered in 1947AD are still being deciphered and studied. They may offer some more authentic material for inclusion in the Bible.

The present Bible: The 66 books of the present Bible were written by no less than 40 writers over a period of nearly two centuries. Unlike the Sikh scripture (see below) God is not mentioned in the Bible at the start of any book or chapter but only as a part of the story. Here are some examples from the beginnings of some chapters.

(a) The Christians believe that every word in the Bible is the word of God but the internal evidence does not appear to substantiate it. For example the Quotation (No.1) from Genesis given above can not be the writing of God unless it reads, “In the beginning I created”

(b) With the exception of a very small part (Psalms) the whole book is in prose.
(c) Christ himself did not write or dictate anything. The accounts were written much after his death.32
(d) The whole book is in stories or parables and the details differ from chapter to chapter. Some stories are repeated with some variations.
(e) Protestant and Catholic Bibles are different from each other.
(f) Miracles are performed by Christ and others throughout the book. Some of them are incredible. 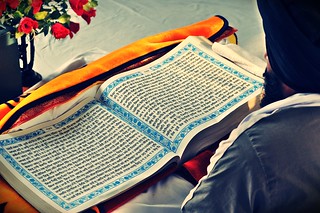 A large part (roughly 80 %) of the hymns in the Sikh scripture (Sri Guru Granth Sahib Ji) were composed and recorded for posterity by the Sikh Gurus themselves. The Sikh religion is therefore unique in receiving the Word directly from their Gurus without the agency of an intermediary.

The writings of various Saints from Hindu and Muslim family backgrounds were included in the Holy Sri Guru Granth Sahib Ji by Guru Arjan Dev Ji, the fifth Guru, when he edited the scriptures in 1604 AD. The 10th Guru later included the hymns of the ninth Sikh Guru in 1705AD. Nothing has been changed since then. The serial numbers of Stanzas together with running totals of hymns are recorded throughout the book making interpolation impossible.

The Gurus respected the authenticity of the Word so much that when the Guru’s own son Ram Rai said, “the word Musalman is a misprint for Beiman (unbeliever/dishonest),” he was ostracised and the Guru did not pardon him throughout his life.

The Holy Sri Guru Granth Sahib Ji does not contain history or biographies of the Gurus or their followers except for some indirect references here and there to important historical events. The hymns can be roughly classified into three categories:
1 Addressed to God as prayer
2 Addressed to human beings or their consciences imploring ideal behaviour and devotion.
3 Addressing harmful social practices and suggesting remedies.
4 Highlighting human weaknesses and their treatment

Every chapter in the Holy Sri Guru Granth Sahib Ji starts with an invocation to God. Even the subheadings begin with similar invocation.

Sri Guru Granth Sahib Ji is written in poetry and covers 1430 pages. Thirty one different tunes (Raags) have been used suggesting their singing. Although the language used is mostly Saadh Bhaasha (A mixture of Indian languages which was understood through out India), the whole book is written in Panjabi (Gurmukhi script). At the time of his death (1708AD) the last Guru of the Sikhs (Guru Gobind Singh) instructed the Sikhs to regard the Holy Sri Guru Granth Sahib Ji as their perpetual Guru (spiritual guide) after him.