What is ‘Dietary Bibek Rehit’ ?

In Sikhi, there is an important concept known as ‘bibekta’. Bibek literally means from two to one. Bibek is a God-given conscience that allows a Sikh to discriminate between right and wrong, i.e. knowing what is good and what is bad.

Not only is Bibekta applied in a Sikh’s everyday life – for example, knowing it is wrong to cut one’s hair or that it is right to do Nitnem (daily prayers) in the morning – but it can also be applied to what one eats. Bujjar Kurehats (cardinal prohibitions) and other Rehat Maryada (Code of Conduct) rules come into play here. 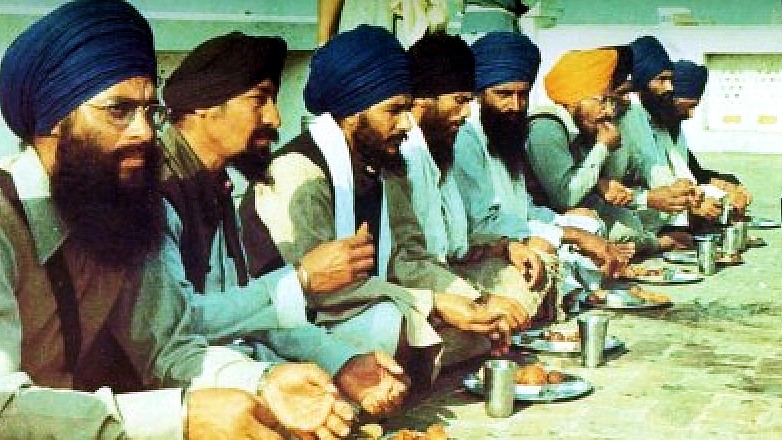 A ‘Bibeki’ is a person who adheres strictly to and regulates his life in accordance with the Guru’s commandments. One who truly loves Guru Ji will follow his commandments since it is dearer to Guru Ji than the Sikh itself. That Sikh has truly offered his head to Guru Ji, who only lives to please Guru Ji. However, this rehit will be of no use if one does not maintain Amritvela, perform daily Naam Abhiyaas (practice of repeating the Divine-Name), and keep humility and sincerity, otherwise keeping Bibek will just promote ego.

Naam is given during initiation. So Guru Ka Langar or food that Gursikhs eat pertains to food prepared by people who have taken Amrit and received Naam.

In accordance to Hindu mythology, Draupadi asked the saint Sant Bheesham Pitama, why he had not come to her rescue when she was stripped of her clothing in Duryodan’s court. She queried him, saying that if he was a saint, why did he not raise his voice when evil was going on before his very eyes in Duryodana’s court. He started to cry and said, “Daughter, I shall tell you the truth; my mind became clouded by darkness as I had eaten in Duryodan’s house.”

Therefore, this shows how the love of God breaks away from a being as their mind becomes clouded by filth and prevents them from performing good deeds.

There was a high government official of the city called Malik Bhago who gave a general feast and also welcomed Guru Nanak Dev Ji. However, Guru Ji refused the invitation and said, “We are fakirs, what have we to do with your feast?” He was then asked again; therefore, Guru Nanak Dev Ji took Bhai Lalo Ji with him and went to Malik Bhago. Malik Bhago said furiously to Guru Ji, “You are dishonouring Kshatriyas by eating dry chapaties in the house of a low caste carpenter. My feast will offer you delicious food. Why do you refuse to eat it?”

Guru then said, “Look Malik Bhago, wealth gathered by cruelty and corruption towards the poor is like sucking their blood which you have done. You had invited me to partake of blood, leaving food pure as milk. How could I accept it?” This showed that Bhai Lalo was the symbol of honesty and hard work.

Therefore, the story shows how food from the faithless cynic is nothing but poison, just how Gurbani mentions that Maya is just like sugarcane which is sweet from the outside but inside Maya is just poison which only leaves pain in the end.

Story from the early life of Guru Amar Daas Ji

Before Guru Amar Daas Sahib Ji became the third Nanak, he met a Saadhu (holy man) who once ate in his house. On leaving, when the Saadhu realised that Baba Amar Daas Ji was without a Guru, the Saadhu became angry and told Baba Amar Daas Ji that, by eating with him, he the Sadhu had lost all his spiritual wealth which he had earned after many years of meditation. Baba Amar Daas Ji cried the whole night. This shows that if one eats from someone who is without a Guru (has not taken amrit) and does not recite the Gurmantar, one looses their profit of Naam. So how can they ever cross over? By eating by someone who is unrighteous, they too become unrighteous.

When we eat from a faithless cynic, this affects our Naam. It influences the five vices and thinking. Just as when people say, “you are what you eat” due to physical health, this also includes for our spirituality.

One day Guru Gobind Singh Ji went to Bhai Dayaal Daas’ ( descendant of Baba Aadam Ji) village and told Bhai Sahib to take Amrit. Bhai Sahib did not take Gurus Hukum seriously and ignored the request. Some time went by and Bhai Sahib had a strong desire to meet Guru Sahib at Sri Damdama Sahib. When approaching Guru Sahib he greeted Guru Sahib but Guru Ji ignored him. Bhai Raam Singh a devoted servant of Guru Sahib asked Guru Sahib why he had ignored Bhai Dayaal Daas knowing that he was descedenent of a Gurmukh (Baba Aadam Ji ) who served the fourth Guru. Guru Sahib responded “He is without a Guru, he has not taken Amrit”. Dayaal Daas responded “I am a Sikh. Sikhi has been in my family since the fourth Guru. I don’t smoke, drink or eat meat. I dont cut my hair”. Still Guru Sahib did not embrace him.

Bhai Ram Singh Ji told Dayal Das “We will be apporaching your village in some time prepare langar for the Guru.” When Guru Ji approached the village ( Bhuchey) Guru Sahib’s horse was thirsty. There was a nearby pond in the village; however, Guru Sahib’s horse did not drink from the pond. When the Sangat asked Guru Ji as to why the horse refused the water from the pond. Guru Sahib said that in this village there is a ‘nigura’ .

Dayaal Daas then requested Guru Sahib to come to his house and bless the langar. Guru Sahib responded:

Meaning the food can be only blessed if prepared by a Sikh of the Guru. Guru Sahib further stated:

Meaning their greeting is insincere.

Historical evidence of Dietary Bibek Rehit can be found in the historical records of M.A. Macauliffe who writes:

“…so amid the general corruption of the religion of Gobind there are to be found about one hundred Sikhs at Naderh in the Dakhan, who are said to have up to the present time preserved intact the faith and ceremonies of Guru Gobind. They have kept aloof from the contact of Brahmins. Brahmin ministrations are not permitted either at their births, their marriages, or their obsequies. Whether they be Brahmin or Sudras who receive the sacramental pahul, all are by this fact admitted within a pale of social and religious equality. Brahmin weds Sudra and Sudra weds Brahmin. No need, therefore, to put their infant daughters to death through fear of not obtaining for them husbands of their own social status, as is the custom among such a large section of the Sikhs of Punjab. And widow marriages, reprobated by Hindus and now consequently by the Sikhs of the Punjab are habitually solemnised with the clearest conscience among the Sikhs of Naderh…At Patna, as at Naderh, the Sikhs pay the strictest attention to the Injunctions of Guru Gobind. Sleeping or waking, they are never without the habiliments known as the “five Ks.” So strong is the aversion of the more orthodox among them to Hindus, that they will not even partake of food cooked by their hands. This is carrying orthodoxy a long way, but still further is it carried when they will not partake of food cooked even by a Sikh who has not on his person all the ‘five Ks’”

(Macauliffe in “The Sikh Religion under Banda and its Present Condition”)

During the Dharam Yudh Morcha Baba Ji visited the city of Phagwara for an event. Baba Ji had been in Phagwara since the morning, the Sangat requested Baba Ji to eat Langar however he declined. Later on in the day, the Sangat pleaded again that Baba Ji eat Langar as he had not eaten anything since the start of the morcha (protest). Baba Ji replied, “Is this ‘Guru-Ka-Langar’ or ‘Mil-Goba Langar’?” ‘Milgoba’ means mixed, confused or doubtful. Baba Ji went on to say, “If it is Guru-Ka-Langar I will eat it.” The Sangat realised what Baba Ji meant and returned back without having served food to Baba Ji.

7.ਗੁਰ ਸੰਗਤਿ ਕੀਨੀ ਖ਼ਾਲਸਾ ਮਨਮੁਖੀ ਦੁਹੇਲਾ ||
“The Khalsa associates with the Guru’s Sangat (company), whilst the Manmukhs (those who do not obey the Guru) remain in duality.”
(Bhai Gurdas II, court poet of Guru Gobind Singh Ji)

In Amrit Sanchaars (initiation ceremonies) the Panj Piaare give the clear directive: “ਖਾਲਸਾ ਦੇ ਰੋਟੀ ਬੇਟੀ ਸਾਂਝ ਖਾਲਸੇ ਨਾਲ ਹੈ |” (“The Khalsa keeps the relation of dining and marriage within the Khalsa”) which has been passed down in oral Rehat since 1699. It is noteworthy that although an Amritdhari Gursikh does not eat cooked or prepared foods from a non-Gursikh, this does not apply to raw ingredients.

The Panthic Sikh Rehit Maryada also states conditions on who not to keep social relationship of food and marriage (Roti Beti di Saanjh) with:

The above line in the Sikh Rehat Maryada has a footnote that states:

From the above, it is clear that a Sikh eats from fellow Sikhs. As a Sikh cannot eat from tobacco users or those who cut their hair it follows that a Sikh cannot eat from restaurants or places where non-Sikhs or at least people with cut hair or who smoke prepare the food. Those Sikhs who eat only from Amritdharis avoid any situation of violating the Rehit (code of conduct) as per the Akal Takht’s Rehit Maryada.

Sikhs must abstain from alcohol and tobacco, that is a given. Arguments ignored, most Sikhs also agree that it is against Sikhi to consume meat, fish, or eggs. Gurbani clears up all doubts and clearly prohibits the slaughter and eating of animals. Dr. Ganda Singh, a 20th century famous Sikh historian, collected historical edicts and commands written by the Guru Sahibs and published them in his book “Hukamnamas”. On page 64-65 a photograph of the Sixth Nanak, Guru Hargobind Sahib’s Hukamanama (edict) is given with a translation of it in Punjabi: 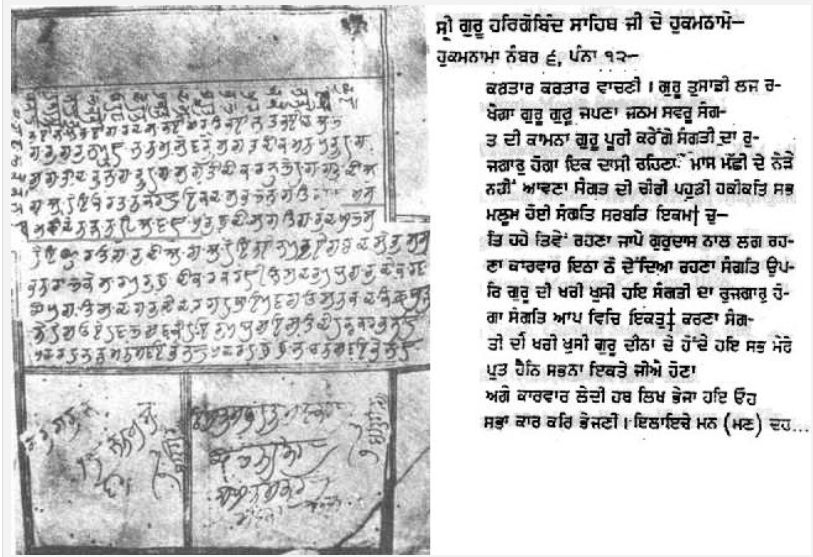 So the most basic Bibek Rehat a Sikh can keep is to abstain from meat, fish, eggs, foods with animal derivatives, alcohol, tobacco, and non-medicinal drugs. Also not eating from the hands of smokers.

There are varying levels of Bibek. There are also other rehats, depending on how strict an individual wishes to be and how much of Guru Sahib’s maryada they are able to follow. These rehats include:

Whatever level of practice an individual interprets is right for them, a Gursikh should at least observe the minimum. The reason Gursikhs increase the level of observing Rehat is only to strengthen their mind, to avoid it wandering whilst in connection with the Divine and to improve concentration. If these Rehits (or any other) are kept for any other reason (for show etc) they become a hindrance to us and slow down progression, which in return becomes hypocrisy (pakhand) and ego. This is the reason why a lot of Gursikhs keep their personal Rehit discreet, to avoid collision with ego.