What do you know of Udaasis?

‘Udaasi’ is an ascetic sect founded by Baba Sri Chand (1494-1629), the elder son of Guru Nanak Sahib Ji. The word ‘Udasi’ is derived from the Sanskrit word which means “one who is indifferent to or disregardful of worldly attachments, a stoic, or a mendicant.” In Sikh tradition, the term udasi has also been used for each of the four preaching tours of Guru Nanak Sahib Ji; in this sense, udasi meant a prolonged absence from home. Some scholars, including many Udasis, trace the origin of the sect back to the Puraaṇic age, but, historically speaking, Baba Sri Chand was the founder. Udasis are not Sikhs.

Baba Sri Chand was a saintly person. It is said that his object in establishing the order of the Udasis was to propagate the teachings of his father, but it is a fact that the religious discipline and practices observed by this sect were not in line with Guru Nanak Sahib Ji’s teachings and Maryada (tradition) instructed. Baba Sri Chand kept on amicable terms with the successors of Guru Nanak Sahib Ji. According to Kesar Siṅgh Chhibbar, he sent two turbans at the death of Guru Raam Daas Ji in 1581, one for Prithi Chand, the eldest son of the fourth Guru, and another for Guru Arjan Dev Ji in recognition of his succession to the Guruship. On the other hand, Guru Amar Daas Ji, took steps to keep the Udasi sect separate from Sikhism. There was a basic difference between the two sections. The Sikhs believed in family-life, while the Udasis believed in celibacy. The Udasis wanted to join Sikhism on their own terms to which the Guru did not agree. Narang observes in his connection: “The Sikhs were once for all separated from Udasis, and raised above asceticism, were free and fit to follow their course of national progress” (G.C. Narang: Transformation of Sikhism, p.33). J. D. Cunningham writes that Guru Amardaas Ji was “active in preaching and successful in obtaining converts. He found an attentive listener in the tolerant Akbar. He saved the infant church from early death by wholly separating the passive and recluse Udasis from the regular Sikhs” (J. D. Cunningham: A History of the Sikhs, p.45).
Gurbani says:

Generally, the Udasis proved zealous preachers of Sikh teachings and carried its message to the far corners of the country and beyond. They especially rediscovered places which had been sited by the Guru Sahibs and which had fallen into obscurity with the passage of time. They established on such spots their ḍeras and saṅgats and preached from Gurbaṇi. Thus the Udasi centres popularized the teachings of Guru Nanak Sahib Ji not only in the Punjab but also in far off places.

The Udasis preached the message of Gurū Nānak and revered and recited the bāṇī of the Gurūs, but they retained their separate identity. Bābā Srī Chand did occasionally visit the Sikh Gurus who treated him with respect for being a saintly personage as well as for being a son of Guru Nanak Sahib Ji. But they extended no patronage to his sect or religious group. A notable Udasi sadhu in Sikh history is Mahant Kirpal who took part in the battle of Bhaṅgānī (1689) under Guru Gobind Siṅgh Ji.

After the abolition of the order of the masands by Guru Gobind Siṅgh Ji, the preaching of Guru Nanak Sahib Ji’s word fell to the Udasis who also gradually took control of the Sikh places of worship. When Guru Gobind Siṅgh Ji evacuated the Fort of Sri Anandpur Sahib along with his Sikhs, an Udasi monk, Gurbakhsh Daas, undertook the task to look after the local shrines such as Sīs Gañj and Kesgaṛh Sahib. When after the death of Guru Gobind Siṅgh Ji, one Gulaab Rai, an impostor proclaimed himself guru at Anandpur Sahib and tried to take possession of the shrines, Gurbakhsh Daas thwarted his scheme. Gurbakhsh Daas successors continued to look after the Anandpur Sahib shrines till their management was taken over in recent times by the Sikhs under the Shiromaṇī Gurdwārā Parbandhak Committee.

At Nānder where Guru Gobind Siṅgh Ji passed away, Mahant Ishar Daas Udasi performed the services at Darbaar Guru Gobind Siṅgh (Hazoor Sahib) and managed the shrine from 1708 to 1725. He was succeeded by his disciple Gopal Daas Udasi, who remained in charge of Darbaar Hazoor Sahib up to 1746. Gopal Daas was succeeded by his disciple Saran Daas Udasi, who served the shrine for a long period of 30 years. After Saran Daas the control of the Darbaar passed into the hands of the Sikhs who had, by that time, come from the Punjab in considerable numbers and settled at Nander.

Udasis recruit their followers from all castes and professions. In their religious practices they differ from the Sikhs, though they revere Guru Nanak Sahib Ji and Guru Granth Sahib Ji like all other Sikhs. In their monasteries, Guru Granth Sahib Ji is the scripture that is read. However, after the SGPC was made, fewer deras keep Guru Granth Sahib installed there, fearing the Sikhs could take over the management of the deras. They do not subscribe to the Sikh rites. Their ardaas also varies. Ringing of bells (ghaṇṭī or ghaṛīāl), blowing instruments (narsiṅghā or siṅghī) form part of their religious service. They worship idols of Guru Nanak Sahib Ji and Baba Sri Chand, a practice strictly condemned by all the Sikh Gurus and Guru Granth Sahib Ji. Their salutations are Vaahguru (Glory of the God), Gajo Ji Vaahguru (Hail aloud the glorious Lord) or Alakh (Hail the Unknowable).

Some of the Udasis wear white while others prefer gerūā (ochre) or red-coloured garments. Those belonging to the Nāngā sect remain naked, wearing nothing except a brass chain around their waist, which is contrary to the way of the Sikhs. Some wear matted hair and apply ashes over their body. Some wear cord worn around the head, neck and waist. They abstain from alcohol, but use bhang (hemp), charas and opium. They practise celibacy. Their beliefs, discipline and identity does not qualify Udasis to be Sikhs unless they become Amritdhari and embrace the Sikh faith.

Besides disseminating the word of Guru Nanak Sahib Ji, Udasi centres serve as seminaries of Sikh learning, which takes heavy influence from Brāhmanism. Chelās, i.e. disciples, gather around the head of the monastery who instructs them in Sikh and old classical texts. The heads of these centres travelled with their pupils to places of pilgrimage and participated in debate and discourse.

The Udasi buṅgās or rest houses around the Harimandar Sāhib were among the prominent centres of learning. Udasi cloister at Amritsar, Brahm Būṭā Akhāṛā, ran a Gurmukhi school which attracted a considerable number of pupils. Some Udasi centres also imparted training in Indian system of medicine and physiology. One such seat was the buṅgā of Paṇḍit Saroop Daas Udasi who was a great scholar as well as an authority on Charaka Samhitā, the famous treatise on Ayurveda.

The central Sikh institution has since the time of Guru Nanak Sahib Ji been the Dharamsala. With the general persecution of Sikhs from the time of Banda Singh Bahadur until the latter part of the 18th century, the Dharamsalas or Gurdwaras had to be abandoned and the control fell into non-Khalsa hands. Udasis and Hindu devotees of the Gurus took control of the Gurdwaras and “began to act independent of Panth and Panthic ideology and reverted to old Hindu religious practices.” Udasis “believed in the Vedas, the Puranas and the Shastras” and were even classified as a Hindu sect by Cunningham in his book History of the Sikhs. Sikh dharamsalas began to be operated in a fashion similar to Hindu temples with the treatment of Guru Granth Sahib Ji as an idol, the actual installation of Hindu idols and restrictions on lower castes in worship. Even the celebration of Gurpurabs was Hinduised with sharadhs being held in memory of the Gurus. When the Sikhs became rulers of the Punjab, the dharamsalas remained in the hands of non-Sikh Udasis and thus rather than promoting true Sikh ideals, dharamsalas promoted a Vedantic and Hinduised mutation of Sikhism. In the early 20th century, the Singh Sabha movement began the task in freeing the Gurdwaras and dharmsalas, and undertook the important step in reviving the Sikh tradition.

DISTINCT DIFFERENCES BETWEEN SIKHS & UDASIS
In 1926 the Lahore High Court passed a judgement that Udasis are not Sikhs. A large number of differences between Sikhs and Udasis have been detailed. The most important are : 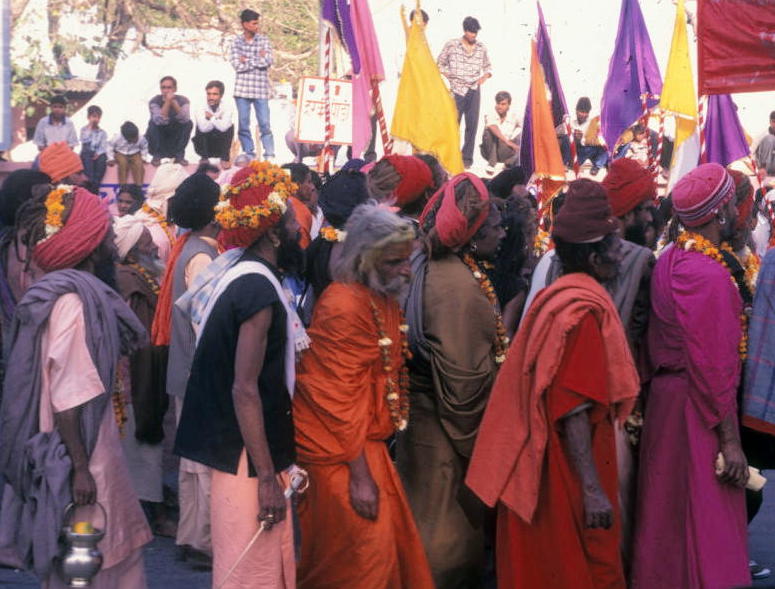 Udaasis at a religious gathering.