What do you know of the Shiromani Gurdwara Prabandhak Committee?

The Shiromani Gurdwara Prabandhak Committee popularly known as the SGPC- is a statutory body constituted under an Act of the Panjab Legislature passed on 9th July 1925. It is invested with certain duties regarding the administration of Gurdwaras, educational programmes and the propagation of the Sikh faith. Its Dharam Parchaar Committee is specifically meant for the publication of literature on Sikhi. It has produced a number of books and tracts on Sikhi in English and modern Indian languages.

The SGPC controls the Golden Temple, the Langar attached to it, Guru Ramdas Nivaas and Guru Ramdas Hospital, Amritsar. It also manages the Khalsa College Bombay, Mata Gujri College, Fatehgarh Sahib, Bhupindra Khalsa High School, Moga, Shri Guru Ramdas Khalsa High School, Amritsar and Guru Nanak Girls Higher Secondary School, Amritsar. It runs the Shahid Sikh Missions at Aligarh, Burhanpur and Hapur. In addition, the SGPC employs teams of Raagis and missionaries for the propagation of the Sikh faith in the Panjab and U.P. It also looks after the interests of those Sikh farmers who have settled in Ganga Nagar (Rajasthan) and Terai (U.P.).

The SGPC awards divinity scholarships to students who win the top positions in competitive examinations held every year. It provides teams and aid for Amrit Parchaar. It has recently established a Central Sikh Museum where heir-looms, old manuscripts and paintings are displayed. The Central Sikh Itihaas Research Board is one of its main departments. It also maintains a research and reference library on Sikh history.

Recently, the SGPC lent its support to the movement for the formation of a Panjabi State on a linguistic basis. The Central Government agreed to the linguistic division of Panjab and the new Panjab State was thus formed in November 1966. 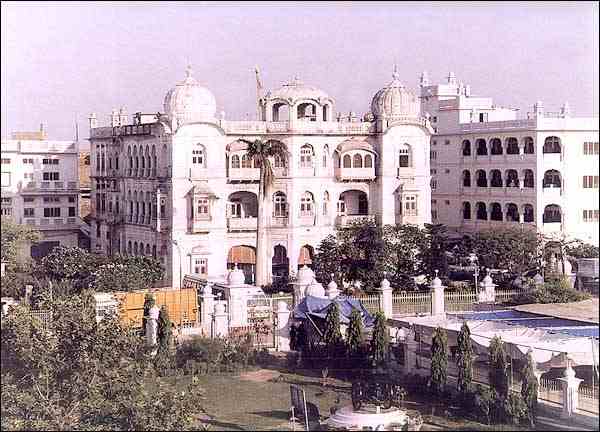 Teja Singh Samundri Hall – The Headquarters of the SGPC, Amritsar.