What do you know of the Akhand Kirtani Jatha?

The Akhand Kirtani Jatha (or AKJ) is a collective group (jatha) of Gursikhs dedicated to Tat Gurmat (pristine from Gurmat), Khalsa Rehit (code of conduct) and service of the Panth. The primary aim of the Jatha is to propagate the message of the Sikh Guru Sahibans through kirtan, Amrit Sanchaars, akhand paaths, sehaj paaths, literature, Gurmat camps, setting up colleges and sacrifices & martyrdoms for the Panth. The Jatha encourages the GurSikhi lifestyle through spiritual progression, rehat, bibek, and truthful living. AKJ kirtan programmes take the form of ‘Rainsbai Kirtans’ (Kirtan that goes on all night) and also Kirtan Darbars (which usually last around 6 hours). The kirtan is usually sung with basic musical tunes – the main emphasis of the kirtans being on the Gurbani rather than the music.

The Akhand Kirtani Jatha was started by the well-known Gursikh, Bhai Sahib Randhir Singh in Panjab in the early 1900s. Ever since then, Gursikhs have been meeting together to sing Gurbani.The Jatha organises religious and social activities under the coordination of local Sangat in Punjab, haryana, delhi and 55 country’s such as U.K, Canada, Italy, U.S.A, France, Indonesia, Malaysia, Australia, New Zeeland and other parts of the world. The Akhand Kirtani Jatha is a world-wide organisation with centres in Punjab, UK, USA, Canada, India, Germany, France, Belgium, the Netherlands, Australia, Malaysia, Singapore and other nations.

—- ORIGINS OF THE AKHAND KIRTANI JATHA (AKJ) —-
The jatha (group) was started in the late 1800s, when a spiritually elevated Gursikh lady asked Bhai Sahib Randhir Singh Ji to re-invigorate the Khalsa Panth with kirtan. The original was informally referred as ‘Bhai Randhir Singh da Jatha’.

The jatha did not have an official name, for a long time. In old texts and newspapers, it is mostly referred to as the “Waheguru Singhs”. In one such text, this was because people would say, everywhere these Gursikhs went they would walk, talk, work, sleep, with Waheguru resounding around them. The name AKJ only became common, when Bhai sahib started doing keertan in all the historical Gurdwaras. It was when Bhai sahib started doing his marathon 48 hour non-stop keertan sessions, that name Akhand Kirtani jatha (non-stop kirtan group) became prominent and use often by the SGPC officials and the historical Gurdwaras where they performed keertan. This was how the name Akhand kirtani jatha came in existence. Bhai sahib never named his jatha, and only refered to it as ‘the jatha’. A name commonly used in India, which means a group. The name was started by Parbandaks and managers of the Gurdwaras. Later it got registered in the 1970s, as with most jathebandies. Today it is a world wide orgainzation which spread th message of Shabad Guru, and like everyone else it considers itself as part of the Khalsa Panth and not a separate entity.

Bhai Randhir Singh was given the title of “Bhai Sahib” and the suffix “Ji” from the Panth as he he was honoured by all the 4 “Takhts” (5th Takhat was ordained later on) or supreme centres for Sikhs for committing his life for the sacrifice of the Panth and always propagating the true message of Gurmat and inspiring people to take Amrit. Bhai Randhir Singh and Bhai Veer Singh were the only Sikhs to receive this title in the 20th century.

Bhai Sahib Randhir Singh ji was very prominent in the Panthik arena. There was wide recognition of his high Jeevan and Panthik Kurbani. Many of the jatha went to jail in the anti – British movement, and suffered a lot of torture. Bhai Sahib and Baba Attar Singh with many other Gursikhs had brought a lot of change in the Panth via the Gurdwara Sudhaar Movement. They worked under the banner of the Panch Khalsa Divan. There was a huge conference at Patiala. This was organised by the Maharaja of Patiala. Bhai Sahib was made President of the conference. However Bhai Sahib gave a powerful address in this conference condemning the corrupt forces in the Panth. Bhai sahib openly stated to the Maharaja, that his throne has been blessed to him by Satguru. He told him to give his Raj to the Panth, or he will lose it. Such has happened today. A lot of intimidation was put to Bhai sahib at that conference to not say what he believed. But Bhai Sahib was full of Tat Gurmat passion. It was Giani Amolak singh and other Gursikhs who stood side by side with Bhai sahib to make sure Tat Gurmat is stated.

The SGPC published Rehat is the minimum common Rehit Maryada that all Sikhs should believe in. It does not stop you from following more rehit. Bhai Randhir Singh or the Jatha never published or formed any Maryada parallel to the Panthic Sikh Rehit Maryada. The Jatha’s interpretation and strict devotion to the purest form of Gurmat differs them from those Sikhs who choose to interpret Gurmat Maryada in a less strict way. The Jatha strongly believes that the teachings of Sri Guru Granth Sahib Ji is the yard-stick for the Truth and provides guidance on all issues.

Nitnem Banis:
According to the old Panthic Sikh Rehit Maryada, published by the SGPC:

“You are supposed to know Gurmukhi (Punjabi alphabet). (If you do not, you must learn it). And recite or listen to the recitation of at least the under mentioned scriptural compositions, the daily repetition of which is ordained, every day : (1) The Japuji Sahib, (2) The Jaap Sahib, (3) The Ten Sawayyas (Quartrains), beginning “sarawag sudh”, (4) The Sodar Rahiras and the Sohila. Besides, you should read from or listen in to the recitation from Sri Guru Granth Sahib Ji.”

However, on 28th April 1985, the Sri Akal Takht Sahib issued a Hukamnama amending the Nitnem section of the Sikh Rehit Maryada. Unfortunately, this amendment has not been implemented in the printed version of the Maryada till this date for unknown reasons.

The 5 Banis recited every morning are the are the same Banis that are recited when preparing Amrit during Amrit ceremony. A Gurskh learns from the Amrit Sanchaar that the Banis being read there should be read every day so that the internal Amrit is experienced every day. Most Jatha Singhs also do Siri Sukhmani Sahib along with their Nitnem and this does not violate the basic Nitnem. It is foolish to make an issue out of this. As Gursikhs we should not be limiting ourselves but increasing our Nitnem and Amrit-vela on a regular basis. 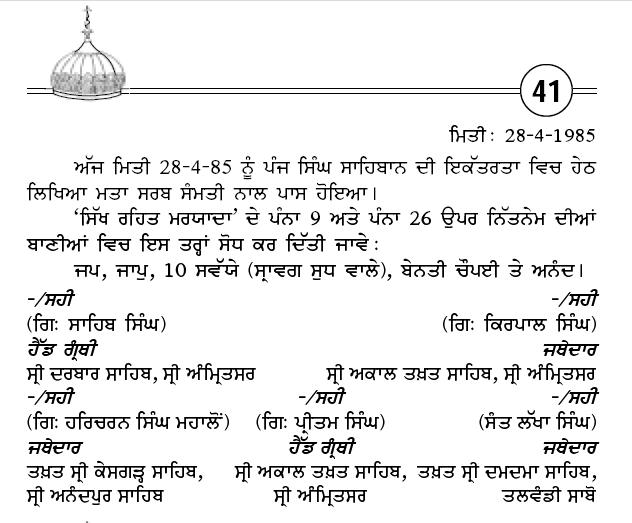 According to the Panthic Sikh Rehit Maryada, published by the SGPC:

“The undermentioned four transgressions (tabooed practices) must be avoided 1. Dishonouring the hair; 2. Eating ‘Kutthaa’; 3. Cohabiting with a person other than one’s spouse; 4. Using tobacco.”

The Jhatka, like all Sikhs, agrees with the Panthic Rehit Maryada that “Kutthaa” prohibited. The question is, what is Kuttha? While Sikh scholars and the SGPC have defined Kuttha in modern times to mean “meat slaughtered in the Muslim way” or “Halaal meat” (which they have added as a footnote for explanation in the SGPC published Maryada), the other interpretation is â€œslaughtered animalâ€ or â€œkilled animalâ€ (viz. meat). As a result of this difference in interpretation, some Sikhs understand the word â€œKutthaâ€ to mean Halaal meat as opposed to meat in general. The Jatha, like other Gursikhs, believes that on the fundamental basis of Gurbani and etymology, Kutthaa means “killed meat” (i.e. killed in any way).

Keski (turban) being Kakkaar:
According to the Panthic Sikh Rehit Maryada, published by the SGPC:
The five K’s are:
I. Kesh (unshorn hair),
II. Kirpan {sheathed sword} (The length of the sword to be worn is not prescribed.,
III. Kachhehra (The Kachhehra (drawers like garment) may be made from any cloth, but its legs should not reach down to below the shins.),
IV. Kanga (comb),
V. Karha {steel bracelet} (The Karha should be of sarbloh.)

The Jatha, believes Keski is Kakkaar, not Kesh. They base this on references in the historical text of “Guru Kian Sakhian” (also known as “Bhatt Vehee”) and other Rehatnamas. By believing Keski (turban) is the Kakkaar, it doesn’t negate Kesh or undermine the sacredness of Kesh. In fact, promoting the wearing of a Keski (turban) shows greater respect and reverence for the sacred hair and also the Dasam Duaar. If the Jatha had given the option of cutting hair and keeping Keski instead of that, then it would have violated the SGPC published Maryada but as things are, the Jatha is the strongest supporter of Kesh. Violation of cutting hair is one of the 4 Bajjar Kurehits (cardinal sins).

Raagmala The Panthic Sikh Rehat Maryada states:
“The reading of the whole Guru Granth Sahib (intermittent or non-stop) may be concluded with the reading of Mundaavni or the Raag Mala according to the convention traditionally observed at the concerned place. (Since there is a difference of opinion within the Panth on this issue, nobody should dare to write or print a copy of the Guru Granth Sahib excluding the Rag Mala)… “

Raagmala is the title of a composition of twelve verses, running into sixty lines, appended to Sri Guru Granth Sahib Ji as a table or index of raags that appears after the “Mundaavni”, i.e. the epilogue or “closing seal”. There being no indication to this effect in the caption, the authorship of Raagmala has been the subject of controversy; more so the point whether it should form part of the recitation of Gurbani in its entirety (i.e. being included in Sehaj Paath or Akhand Paath bhog/completion). The composition is not integral to the theme of Sri Guru Granth Sahib Ji, and it has little musicological, instructional or spiritual significance.

The Jatha stands with the decision of Panth on this matter. The Jatha, do not believe in Raagmala being composed or written by the Guru Sahibs, but was added to Sri Guru Granth Sahib Ji at a later date. Consequently, they do not read Raagmala when concluding a Sehaj Paath or Akhand Paath. This does not violate Maryada. Till this date, Raagmala is not read at Sri Akaal Takht Sahib, Amritsar.