What do you know of Nirmalas?

‘Nirmala’ is derived from the Sanskrit ‘nirmal’, meaning spotless, unsullied, pure, bright, etc. It is the name of a sect primarily engaged in religious study of Sikhi and ancient Hindu texts. The members of the sect are called Nirmalas. The sect of celibates commanded particular strength in the 19th century.

Guru Gobind Siṅgh Ji wanted his followers not only to train in soldierly arts but also to cultivate letters. Especially during his stay at Pāoṇṭā, on the bank of the River Yamunā, from 1685 to 1688, he had engaged a number of scholars to translate Sanskrit classics into current Braj or Punjabi, in order to bring them within easy reach of the less educated laity. Guru Gobind Siṅgh Ji once asked one of these scholars, Paṇḍit Raghunāth, to teach Sikhs Sanskrit. The latter politely excused himself on the plea that Sanskrit was deva bhāṣā, language of the gods, and could not be taught to Śūdras, i.e. members of the low castes.

It is claimed by some that to counter this caste bias Guru Gobind Siṅgh Ji sent five of his Sikhs, namely Karam Siṅgh, Vīr Siṅgh, Gaṇḍā Siṅgh, Saiṇā Siṅgh and Rām Siṅgh, dressed as upper-class students, to Vārāṇasī, the centre of Hindu learning. These Sikhs are said to have worked diligently for several years and returned to Anandpur Sahib as accomplished scholars of classical Indian theology and philosophy. In view of their piety and their sophisticated manner, it is believed that they and their students came to be known as ‘Nirmalas’. However this is highly improbable since there is scarcely any mention of them in the Sikh literature before the 19th century.

After the evacuation of Anandpur Sahib in 1705, it is believed that the Sikh preachers went to different places outside the Panjab, particularly to Haridvār, Allāhābād and Vārāṅasī where they established centres of learning that exist to this day—Kankhal, near Haridvār, Pakkī Saṅgat at Allāhābād, and Chetan Maṭh and Chhoṭī Saṅgat at Vārāṇasī. These Sikhs, who became known as “Nirmalas”, became influenced by the Brāhmanical (Hindu) teachings and worship as a consequence of them spending a lot of time and company amongst the Hindu Brāhmans at Hindu educational centres across India. When, during the second half of the 18th century, the Sikhs established their sway over the Panjab, some of the Nirmala saints came back here and founded at different places centres which were liberally endowed by Sikh chiefs.

It was customary for Nirmala scholars to attend, along with their disciples, religious fairs at prominent pilgrimage centres such as Haridvār, Allāhābād and Gayā, where they, like other sādhūs, took out shāhīs or processions and held philosophical debates with scholars of other religious denominations as a part of their preaching activity. Sometimes these scholastic exercises led to bitter rivalry and even physical confrontation. During the Haridvār Kumbh in 1855, a general meeting of the Nirmalas held in their principal ḍerā at Kankhal took the first concrete step towards setting up a central body by electing Mehtab Singh of Rishīkesh, reputed scholar of the sect, as their Srī Mahant or principal priest. Mehtab Singh attracted attention of the rulers of Paṭiālā, Nabhā and Jīnd with whose help a pañchāitī akhāṛā named Dharam Dhujā was established at Paṭiālā in 1861. Its formal inauguration took place on 7 August 1862. The headquarters of the sect, however, remained at Kankhal. The sect comprises several sampradāyas or sub-sects each with its own ḍerā and its own following.

The Nirmalas believe in the Ten Sikh Gurus and Guru Granth Sahib Ji. However, due to being influenced by Brahmanical ideology and teaching over years of mixing with Brahmans, the majority of present-day “Nirmalas” do not consider it compulsory nor common among them to receive Amrit i.e. Khaṇḍe dī Pāhul. Any individual that does not believe in the importance of taking Amrit or in wearing the 5 K’s cannot be considered as a Sikh in accordance to the Sikh Rehat Maryada. At first Nirmalas wore only white garments but later adopted the ochre robes worn by Hindu ascetics, which is now a distinguishing mark of the sect, and shared some other practices, such as birth and death rites, with Hindus. They generally practise celibacy, which is rejected in the fundamental teachings of Guru Nanak Sahib Ji, and are devoted to scriptural and philosophical study, but by tradition they are inclined towards classical Hindu Vedic philosophy.

Any individual or group that does not believe in Khaṇḍe di Pahul, maintaining Kesh, wearing the 5 Kakkaars blessed by Guru Gobind Singh Ji, and believe solely in Sri Guru Granth Sahib Ji and no other scriptures or devi devte, cannot be considered as Sikhs. 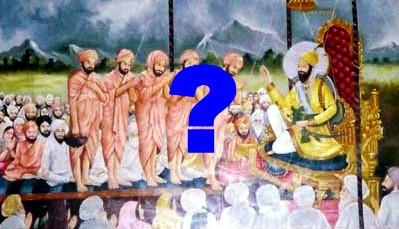 It is claimed by some historians that non-Khalsa Sikhs were given the role in propagating the Guru’s religion and in the management of Gurdwaras during that period. Furthermore, it is claimed that Guru Gobind Singh Ji sent some Sikhs (who became known as ‘Nirmalas’) to the Hindu holy city of Kashi to learn Sanskrit and to establish a Sikh University in Punjab for the purpose of training scholars on Gurmat. This group of Sikhs in turn trained many scholars of Sikh theology, who are well recognized in the Sikh history. It is claimed that among those were included some great Amritdhari Sikhs such as Gyani Gian Singh and Bhai Santokh Singh.

How did Guru Gobind Singh Ji’s predecessors manage to preach Gurmat without finding the need to educate Sikhs educated in Sanskrit at Kashi? It is amazing how Sikh scholars who on the one hand proclaim loudly that our Gurus enlightened the people with their liberating philosophy in the language of the masses, and on the other insist that Sanskrit education is needed to understand this philosophy. Claims by such historians flies in the face of evidence that Sikh Gurus rejected the moral authority of Hindu scriptures and the essentials of Hinduism. The writings of Giani Gian Singh and Bhai Santokh Singh contain many stories and interpretations that contradict the fundamental teachings of Guru Granth Sahib Ji.

Besides, it is a myth that Guru Gobind Singh Ji sent some Sikhs in disguise to Kashi to learn Sanskrit from the Brahmans. Nirmalas (holy man) claim that Sikhs, who were sent in disguise by Guru Gobind Singh Ji to Kashi to learn Sanskrit from Brahmans, founded their organization. It is more likely that Brahmins, who had (have) no moral revulsion about ascribing immoral acts to their own gods and goddesses, made up this story.

Furthermore, it seems reasonable to believe that Brahmins started this organization in Sikh disguise. The story of Nirmalas is full of holes. There is no evidence that Guru Gobind Singh’s predecessors sent Sikhs anywhere to learn Sanskrit. What was the need for learning Sanskrit during the time of Guru Gobind Singh Ji?

If for the sake of argument, we believe that Guru Gobind Singh Ji wanted Sikhs to learn Sanskrit to study ancient Indian literature, where did Guru Gobind Singh Ji, Guru Nanak Ji or Guru Arjan Ji go to learn Sanskrit? Did they go to Kashi? It is quite possible that some medium for learning Sanskrit was available in Punjab so the need for Sikhs to go to Kashi to study Sanskrit does not arise.

Guru Gobind Singh Ji had many scholars and poets with him at Anandpur Sahib; couldn’t he hire few Sanskrit teachers? Were the scholars, who translated Sanskrit texts into Braj Bhasa, not competent enough to teach Sanskrit? Let us suppose further that Guru did send some Sikhs to Kashi. What were their names and where did they come from? Is there any biographical information available about them? What did those Sikhs do with their knowledge of Sanskrit? Did they teach Sanskrit to Sikhs or translated Gurbani into Sanskrit?

Moreover, Nirmala / Mahant organization (Akhara) was started under the patronage of feudal lords, the Rajas of Patiala, Nabha and Jind in 1918. There is no surprise in it! Throughout history rulers have used clergy to keep their subjects ignorant so that they could exploit them without any resistance and public outcry. Brahmins used to elevate their rulers to the status of god, for example, Sri Ram Chander Ji and Sri Krishan Ji were rulers.

Brahmins even regarded Mulim rulers as God incarnate. Christian clergy used to confer divine rights on their kings and the Muslim clergy did the same for their rulers. The Sikh feudal lords used the Nirmalas to keep their people ignorant for easy exploitation. No wonder the Sikhs under the British rule were more educated and better off than under the rule of Sikh Rajas. Nirmalas / Mahants used to frighten people not only with their curses but also had the legal power to impose fine on Sikhs for refusing to comply with the request of the mahant (clause 17 of the charter).