What do you know of Baba Jarnail Singh Bhindranwale?

Giani Jarnail Singh Bhindranwale (February 12, 1947 – June 6, 1984) was the leader of the Damdami Taksal, a Sikh religious group based in Mehta Chownk, Amritsar District.

Bhindranwale carried heavy influence among Sikhs in Punjab during his time of leadership. He tried to spread the original values of Sikhi and persuaded young people to follow the original rules and tenets of the religion. He was known for speaking out against inequalities, prejudice and discrimination against Punjabis and the Sikhs. It is often believed that Bhindranwale supported the creation of the proposed Sikhi-based theocratic state of Khalistan, but this is not the case. His main objective was achieving justice, human rights and dignity for Punjab and the Sikhs. In a speech Bhindranwale states that the day the army storms the Golden Temple that day the foundation of Khalistan will be laid, i.e. the Sikhs don’t demand a separate country but if they are compelled or offered autonomy they will not refuse it.

In 1981, Bhidranwale was arrested for his suspected involvement in the murder of Jagat Narain, the proprietor of the Hind Samachar Group. Although he willingly surrendered to police and later released due to lack of evidence, Bhindranwale was kept on close watch by Indian police officials. Bhindranwale is more notable for his involvement in Operation Bluestar in which he and other freedom fighters occupied the Sri Akaal Takht complex, including the Golden Temple, in Amritsar.

Indira Gandhi, the Indian Prime Minister during the time, saw Baba Ji’s growing popularity and movement within the Sikh Youth as a threat to her dictatorship style rule. As a result she started using false and distorted propaganda to brand Baba Jarnail Singh Ji Bhindranwale as an ‘extremist’ and ‘militant’. Government agents infiltrated the Sikh movement and committed crimes in order to discredit the Sikh movement and help to justify the Indira Gandhi’s plans to attack the Sikh religion.

On June 1st 1984, Indira Gandha ordered a full-scale attack on the holiest of all Sikh shrines, Sri Harmandar Sahib. This army attack was code named ‘Operation Bluestar’. Indira Gandhi used the excuse that she wanted to flush out “extremist militants” led by Baba Jarnail Singh Ji who were “hiding” in Sri Akaal Takht Sahib Ji. However, the truth was that Mrs Gandhi ordered a full-scale army attack on Sri Harmandar Sahib during the Shaheedi Gurpurb (Martyrdom day) of Guru Arjan Dev Ji, the Fifth Nanak. This is one of the busiest times in Amritsar when Sri Harmandar Sahib has large gatherings of Sikhs travelling different parts of Panjab, India and the world to pay their respects.

The Indian army mercilessly massacred nearly 3,000 innocent Sikh pilgrims, including women and children. Sri Akaal Takht Sahib, the Sikh’s Supreme Seat of Authority, was attacked with bullets and fire from Army tanks, to be reduced to rubble. However, during the attack on Sri Harmandar Sahib Ji, Baba Jarnail Singh Ji Khalsa and 300 freedom fighters laid down their lives and became Shaheeds (martyrs) in defending Sri Akaal Takht Sahib Ji. The brave fearless lion fell fighting till his last breath. On June 7th 1984 Shaheed Baba Jarnail Singh Ji Khalsa Bhindranwale’s body was found near the Nishaan Sahibs near Sri Akaal Takht Sahib Ji. Nearby lay the bodies of the warriors and protectors of faith, Shaheed Bhai Amrik Singh Ji, Shaheed General Bhai Subheg Singh Ji and Shaheed P.A. Rachpal Singh Ji who all died fighting till their last breath to upkeep the sanctity and dignity of Sri Akaal Takht Sahib Ji and for Sikhs to have justice and freedom.

Since his martyrdom, Bhindranwale has remained a controversial figure in Indian history. However the Sikh community will always hold Shaheed Giani Baba Jarnail Singh Bhindranwale in high esteem. A few years ago Sri Akaal Takht Sahib declared Baba Jarnail Singh as the greatest Sikh of the 20th century. Harbans Singh’s The Encyclopedia of Sikhism describes Bhindranwale as “a phenomenal figure of modern Sikhism.” 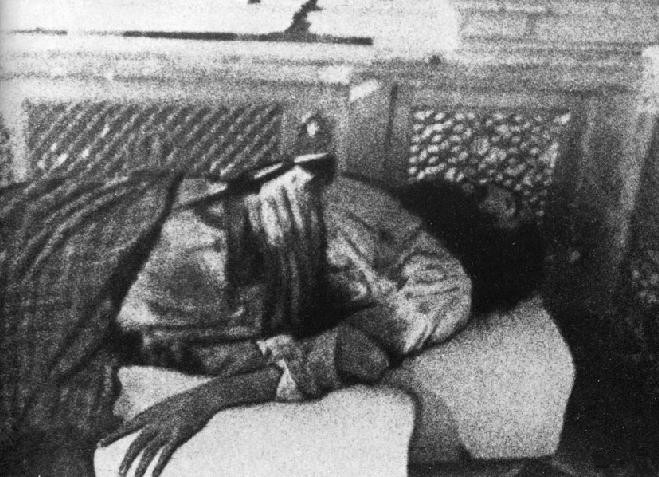 The dead body of Baba Jarnail Singh Ji laying outside Sri Akal Takht on ice to prevent detoriation from the heat.