What do you know of Baba Banda Singh?

Dev in his childhood. Soon after a hunt, he turned ascetic: A Bairagi, and took the name of Madho Das. He settled down at Nanded. He became a devotee of the Guru in September 1708 and sought his blessings. After receiving Amrit he was given the name “Gurbaksh Singh”, however he is popularly known as “Banda Singh”. Guru Gobind Singh Ji gave him a sword, five arrows, a flag and a battle drum.

Taking twenty five Sikhs with him, Baba Banda Singh proceeded to the Panjab to punish the enemies of the Khalsa Panth. He attacked Samana in November 1709. Thereafter, Wazir Khan the Nawab of Sirhind was killed in the battle of Chaper Chiri on 12th May, 1710.

Baba Banda Singh was crowned at Lahgarh and struck coins in the name of the Guru. He allowed his Muslim subjects to follow their religious customs and practices. Soon afterwards, he extended his sway over Pathankot.

The Mughal emperor was perturbed by the conquests of Banda Singh and sent a big army to crush him, Baba Banda Singh was besieged at Gurdas Nangal. After an eight-month siege, he and his followers were captured on 7th Dec. 1715.

Baba Banda Singh along with 700 other Sikhs were martyred in Delhi in 1716. Baba Banda Singh was given horrific tortures but he did not waver from Sikhi. His 4 year old son had his chest ripped open and his heart placed in his mouth. His body was then pierced with hot iron rods and eventually was hacked slowly into pieces. Baba Banda Singh attained martyrdom on 7th June 1716.

Baba Banda Singh’s challenge to the Mughal power showed that the Khalsa had broken the reputation of Mughal invincibility. Given another chance, they could perhaps lay the foundations of a Sikh empire. The opportunity came in 1799, when Ranjit Singh established Sikh rule in the Panjab. 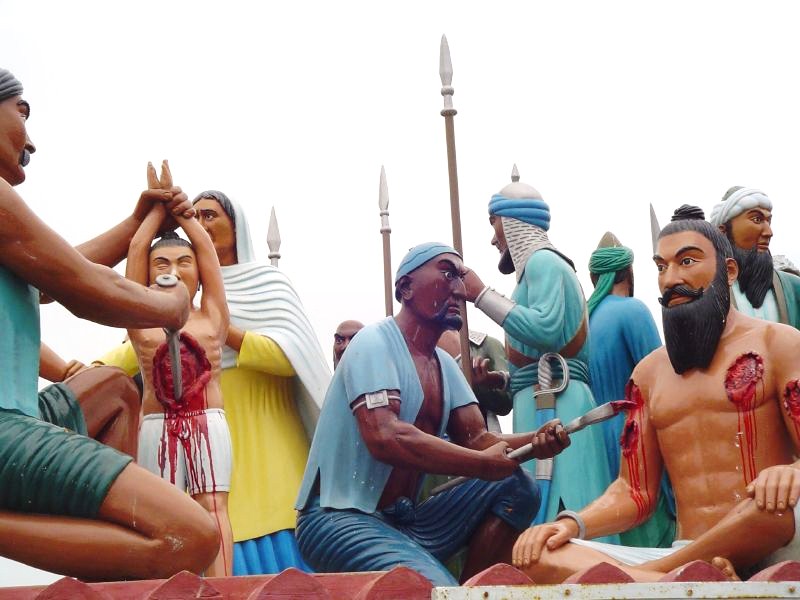 Baba Banda Singh was tortured and his son’s heart was ripped out and forced in to his mouth by the cruel Mughals.