Is there any organized priesthood in Sikhism

Unlike Christianity, Islam, Hinduism or other religions, Sikhism does not have a ordained priesthood, a priest caste or class, or recognise a priest or religious leader to have a special divine status or rights.

Guru Amar Daas Ji, the third Sikh Guru, organized the propagation of the Sikh faith. He divided the country into 22 dioceses – Manjis – each in the charge of a devout Sikh. Daily Keertan was held by all congregations (Sangats). The Guru himself trained many travelling missionaries, including women, they were moved into different parts of India to spread Sikhism

These missionaries, then called ‘massands’ collected offerings from the Sikhs for the Guru, and sometimes misappropriated them for their personal use. In due course, they became powerful as a separate group and started harassing the poor and innocent Sikhs. They moved about like Jagirdars, and Zamindars, with pomp and pageantry, and accompanied by their servants and retainers.

Guru Gobind Singh Ji received several complaints regarding the misdeeds of these ‘massands’ from Sikhs living in different parts of India. He looked into the complaints made against each one. The guilty were duly punished and the order of massands was abolished.

Since that time there has been no professional priesthood, in any form, among the Sikhs. The idea of clericalism as opposed to secularism, of a different morality for the churchman and for the layman has no place in Sikhism. There are neither hereditary priest nor monks. Sikhism does not prescribe a particular dress or uniform for a saint. It does not enforce the vow of celibacy. In Gurdwaras, any competent initiated Sikh man or woman can perform the services for Keertan (singing the sacred hymns) and Kathaa (discourse of the sacred Word).

The person known as a “Granthi” is an attendant who looks after and reads Sri Guru Granth Sahib Ji. A Granthi not only reads Sri Guru Granth Sahib Ji but has close knowledge of Gurbani (the Guru’s Dive Word) that they are able to share with the congregation, as well as having responsibility of observing functions and upholding the Code of Conduct in the Gurdwara. A “Paatthee” is a mere Scriptural reader, which is something which most Sikhs should be competent in doing as it doesn’t necessarily mean deep knowledge of the Sacred Text as “Granthi” would be expected to know. “Giani” (“Possessor of Knowledge”) or “Baba” (“Wise one”) are loosely used as informal titles to preachers and wise Sikhs who are knowledgeable in the Sikh faith.

Keertan-groups generally consist of amateurs. However, there are “Raagis” (musicians trained in musical modes) that have been trained in the musical framework of Sri Guru Granth Sahib Ji and as well as playing in the congregation they teach others the art of Sikh music. Being professionally-trained as a singer does not make someone a priest, because there is no such office or order.

Woman with the required ability and competence are allowed to take part in Keertan and Kathaa on equal terms with the men. They may lead and participate in all ceremonies like initiation, marriage and funeral, where readings from Sri Guru Granth Sahib Ji are common to all such functions.

The Guru instructs his Sikhs to practice and live the Guru’s wisdom and to inspire others with the Divine Word and selfless service to humanity. 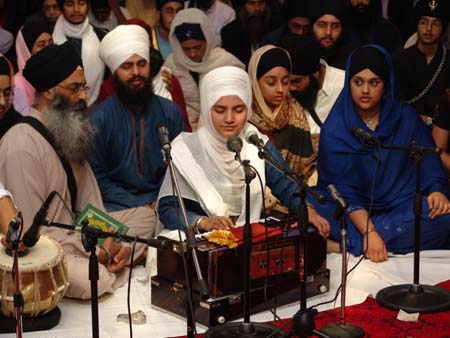