Is drinking permitted in Sikhism?

The Sikh Rehat Maryada (the Sikh booklet of Code of Conduct) states:

The Sikh Gurus banned the use of intoxicants including alcohol on account of its harmful effects. It is physically harmful and mentally disturbing.

The body is considered the Temple of God and therefore a Sikh treats his or her body like a Gurdwara. If someone were to drink alcohol, even the slightest, and enter Sri Harmandir Sahib (the Golden Temple), all people would say that he or she has violated the sanctity of the place of worship and the people the guards there would by force remove the person and deliver an appropriate punishment. If drinking alcohol and going to Harmandir Sahib is so bad, then how much sin is committed when one pours the poison of alcohol in the “Harmandir” (temple) of the body? Gurbani says:

In Persian language, wine is called Sharaab (ਸ਼ਰਾਬ) which literally means ‘the water of mischief’ (ਸ਼ਰਾਤੀ ਪਾਣੀ). By drinking alcohol the intellect is destroyed. Waheguru is forsaken and the gem of the human life is wasted. Drinking alcohol not only causes biological damage but ruins families, relationships and leads individuals to do misconduct and commit sins. Guru Arjan Dev Ji describes those who drink alcohol as:

Alcohol is a depressant that slows brain activity down. While one or two drinks makes most people feel relaxed, more alcohol may cause feelings of anxiety, depression, and often aggression. Sometimes people say “I will only have one glass” but in the mood of joy or sometimes when a person is feeling so low, that the one glass becomes two, then three and eventually the whole bottle of alcohol. Therefore, why become part of this slippery slope pattern?

Alcohol’s first effect as it reaches the outer brain is to distort your judgement and lower you inhibition, while producing euphoria (a sense of pleasure). As you consume more alcohol, and it reaches the cerebellum, your coordination and perception are affected, and you can have memory blackouts. As the alcohol reaches your mid-brain, reflexes diminish; you experience confusion, stupor, and may lapse into a coma. Once the alcohol finally reaches the medulla, or inner core of the brain, your heart rate drops and breathing ceases, resulting in death. Research suggests that continued alcohol use can cause depression. Alcohol robs brain cells of water and glucose, the brain’s food, contributing to a hangover the next day. Furthermore Alcohol depresses the body’s immune system making it easier to get sick. It also disrupts your sleep patterns, further depressing the immune system. Other complications include osteoporosis, obesity, or liver damage. Alcohol has been linked to an increased risk of breast cancer, high blood pressure, diabetes, kidney disease, heart disease, constipation, and strokes. 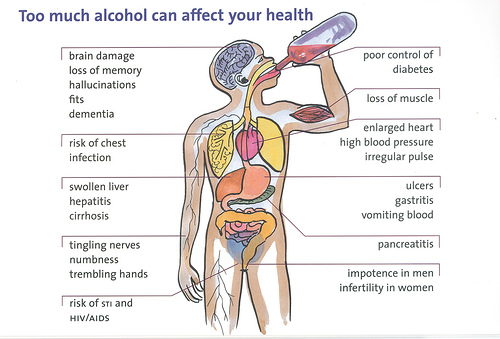 Guru Amar Daas Ji, the third Guru, made drinking liquor/alcohol a Kurehat (prohibition) for the Sikhs:

Yogis, men who practised Yoga as a religious path to meet Waheguru used to drink alcohol to focus their minds when sitting cross legged trying to meditate. Guru Nanak Dev Ji condemns the consumption of liquor and alcohol:

Guru Gobind Singh Ji in his Rehatnama (ethical code of conduct) addressed to Bhai Chaupa Singh banned the consumption of any alcohol for any Sikh.

Drinking alcohol even in small quantities to enjoy its effect is against Gurmat. Alcohol and liquor are forbidden because of their ill effects on the mind and body and foremost it is addictive drug. BBC Health documented that a recent medical study has proven to show that drinking alcohol during pregnancy can cause physical and mental birth defects. Each year, more than 40,000 babies are born with some degree of alcohol related damage. Although many women are aware that heavy drinking during pregnancy can cause birth defects, many do not realize that moderate or even light drinking also may harm the foetus.

Alcohol, especially in excess, is responsible for altering brain activity and affecting concentration and reflexes. As a result, individuals under the influence of alcohol are more susceptible to accidents especially while driving. Other side affects include insomnia (the inability to fall asleep and stay asleep), heartburn and high blood pressure. Excessive use or abuse of alcohol can contribute to increased levels of triglyceride in the blood that can then lead to heart disease.

We should feel blessed that our Guru was a Perfect Guru who was All-Knowing. In the last few decades the Western world has discovered the ill effects of alcohol on our mind, body and even on society. As a result restrictions were gradually brought on the drinking and driving, campaigns on the effects of alcohol abuse on youngsters, and the damage alcohol does to mothers and society in the whole. Furthermore however, our Guru told us this over 500 years ago.