Early in the twentieth century, many Sikhs migrated to British Columbia (Canada) to improve their economic prospects. However, on account of racial trouble, they had to face severe hardships, most were engaged in lumbering and the timber trade. Some of them migrated to the south in California (USA). They initially worked as farm-labourers and were later allowed to buy land after a great struggle. Wherever they settled, they opened Gurdwaras for the benefit of visitors and new settlers, these also served as community-centres.

After the partition of India in 1947, many Sikhs migrated from West Pakistan and settled in different countries. Professional Sikhs like doctors, teachers and engineers settled in the big cities of Canada and USA. Uprooted farmers from the West Panjab went to North California in large number and settled round Stockton and Yuba city. They also brought their relatives and friends from the Doaba region of the Punjab. Now they own big ranches and orchards in California.

In 1969, Sardar Harbhajan Singh Puri of Delhi migrated to Canada and was subsequently thrown out of the country, he then went to Los Angeles and started Yoga classes there. He was able to get a large number of American students interested in Yoga. By and by, he introduced them to a form of Sikhi. He called his movement 3HO (Healthy, Happy, Holy organization). It spread all over the U.S.A. and a number of Ashrams were established. Many of his American Sikhs became the Khalsa of Guru Gobind Singh with Yogi Ji as their head. They set up their own communities in Ashrams and participated in the cultural and economic life of important cities. The Sikh Dharma Brotherhood and the Khalsa Council of the Western Hemisphere were established to carry the message of the Gurus to peoples of the West. The number of American Sikhs is on the increase. 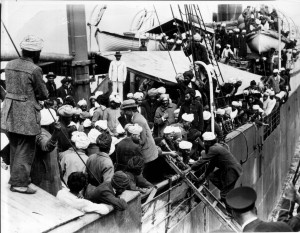 SIkhs arriving in Canada on the Komagata Maru 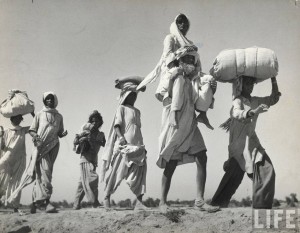 The Partition of India – The greatest exodus of humans in history

Originally Sikhs came to Great Britain to study. However, after 1947, Sikhs from Panjab migrated in large numbers to the industrial centres like London, Birmingham and West Yorkshire to work as labourers and technicians in factories. Today the Sikhs have their largest concentrations in Ealing, Southall and Eastham in Greater London. They have now more than two hundred Gurdwaras in the UK. Sikh children born and educated here are torn between two cultures – the culture of their parents and the culture of England. There is a great need to educate them on their rich parental heritage and Sikh tradition. Gurmat children’s camps, seminars, English translations projected in Gurdwaras, group discussions and literature written in English are of great use to Sikh youth in understanding their religion and culture. In the 1980s many Sikhs from Africa mostly from Kenya, Uganda and Tanzania have also settled in Britain and have taken up various jobs, and some opened shops and ware-houses. The population of Sikh today in UK is over 600,000. 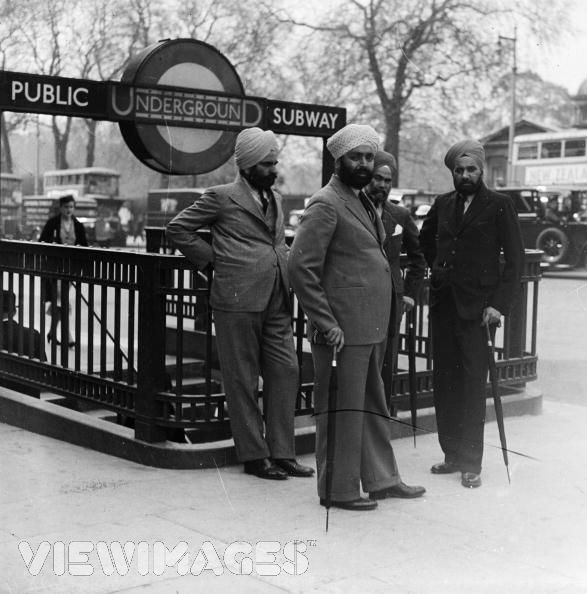 A third concentration of Sikhs abroad is in Malaysia and the Far East. There they work as doctors, lawyers, engineers, teachers, in the Police and the Army. They play an important role in the political, economic and social and cultural life of the cities in which they live in. In Malaysia, they have Gurdwaras in Kaulalumpur, Seramban, Perak, Penang, Kedah, Sarawak and other places. The Sikhs settled in Thailand, Singapore and Hong Kong also have Gurdwaras there. They donate liberally to local charitable institutions. The Singapore Sikhs have set up a Sikh Resource Centre at Gurdwara Katong. Apart from distributing Sikh literature, this centre recently helped in the publication of books on ‘Sikh studies’ for the G.C.E. Cambridge Course. Two text-books have been issued by the Sikh Advisory Board and two more for teachers will be published soon. A one-week seminar for teachers of Sikh studies was held in Singapore in September 1985.

It is not possible to enumerate the achievements of the Sikhs in these various regions. The total number of Sikhs settled abroad is about 2.5 million. They are loyal to the countries in which they live but they look to Panjab and its traditions, for spiritual inspiration.