Do Sikhs celebrate the ritual & festival of Rakhri?

The Rakhri ritual is not a Sikh ritual. Its practice doesn’t fit in the Sikh philosophy.

Rakhi or Rakhri means protection. This is a custom among some Hindus. Accepting a Rakhri from a girl, sister or a cousin, means that the boy takes responsibility of protecting her if she happens to the into any trouble. As a token of his promise, he gives some money to the girl after she ties the Rakhri on his wrist. The ritual Rakhri assumes that a girl cannot protect herself. This gives second-rate status to the women. Hence, it is not an approved custom among the Sikhs.

According to historic tradition, the Rakhi or Rakhri was a magic thread tied by a Tantric Yogi, a holy person, or a fakir, to protect the wearer from evil happenings. Later, the Rakhri took the form of the present colorful bangle like thread with flowers and other decorations tied to it. 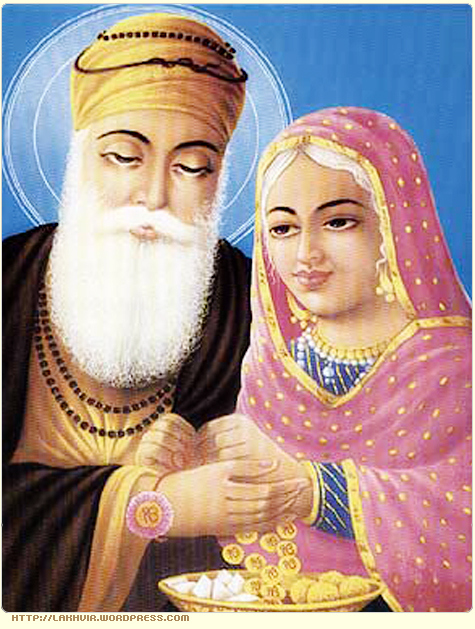 This is a painting by an artist showing Guru Nanak tying a Rakhri on his sister. The artist has gone against the Guru’s teachings and tried to justify something which is not allowed in the Sikh religion.