Do Sikh women have to wear a Turban (Dastaar) as well as men?

To Sikhs, the turban is more than what is a crown to a king or queen. The Sikh Gurus showed a great respect to the turban. But there is a misconception that only men are required to wear the turban. The Guru has graced both men and women with the spiritual crown that not only protects the Kesh (unshorn hair) and Dasam Duaar (tenth spiritual Gate on the top of the forehead) but also gives the Khalsa (both male & female) a unique & distinct identity. Wearing a turban makes a difference and a statement. It saves you! You are out off time and space – it is the uniform of heaven, not of the world’s belongings… We are here to master time and space – not to run after it. Your projection create the world around you – not how it will look in the eyes of others. You stay focused and for a woman it is the most important thing of all to hold the focus and the direction. Wearing bana (khalsa uniform) and the 5 K’s every day makes you stay in touch with our beloved Gurus and you are the Grace of God your whole life long!

“Sabat Soorat Dastar Sira” means, “Let your total awareness be the turban on your head.” This clearly states that a Sikh is instructed to live a natural life and have unshorn hair, and to protect and keep those hair clean he/she must wear a Dastaar on his/her head. This line does not make an exception to women. Sikh Gurus gave women equal rights. Both men and women are given the same message, which means the above line implies to both not only to men. If we are Sikhs of Guru Granth Sahib Ji then we must wear a Dastaar, no matter if you are male or female.

This clearly shows that Khalsa must have its uniqueness, which means to have that uniqueness one must have a Dastaar on his/her head. Furthermore, when Bhai Jait Mal Ji presented the head of Guru Tegh Bahadur Ji to Guru Gobind Singh Ji, Guru Ji said “I will give my Sikh a distinct and unique appearance, which will be recognized while standing in millions”. This uniqueness comes from following the path of Sikhi, which is to have unshorn hair and wearing Dastaar on the head. One can easily recognize a Sikh by looking at a appearance most of which does come from the Dastaar. Guru Ji did not say that he would give uniqueness only to men. When Guru Ji said “Khalsa” he meant men and women both. Men and women both are Khalsa. Guru Ji gave the same Rehat Maryada (code of discipline), same uniqueness, same message, same articles of faith, same religious Bana (dress) and same rights, then how is it that women are excluded in some quarters from wearing the Dastaar. Guru Ji made no distinction and referred to men and women as Khalsa, and instructed them to wear a Dastar. In above line the word “Niaara” clearly means different from others, and it does imply wearing a Dastaar. It doesn’t say only men have to be “Niaara”.

ਖਾਲਸਾ ਮੇਰੋ ਰੂਪ ਹੈ ਖਾਸ ॥
“Khalsa is my own self image.”
Again, Khalsa means men and women both. Guru Ji did not make two different Sikhs or Khalsa. He made one Sikh and there can only be one type or kind of Sikh. There is only one Khalsa. Women make different hair styles, color their hair, and tie them in a bun at the nape of the neck, which is prohibited. Those women in this shape are nowhere near Guru Gobind Singh Ji’s image. Guru Ji always wore a Dastaar. Not only did Guru Gobind Singh Ji, but also all of the other nine Gurus practiced wearing a Dastaar. So how are women who dye their hair keeping the “Roop” (image) of Guru Gobind Singh Ji? Simply put, they are not! Guru Ji had one image not two. Guru Ji had unshorn hair and wore a Dastaar. Women without a Dastaar do not even come close to that image. When those women look in the mirror, do they see Guru Gobind Singh Ji? I don’t think so. The Dastaar is a sign of dignity. Men still have their dignity but where is the women’s dignity? They have lost it to fashion. Not many Sikh women wear a Dastaar but their numbers are steadily growing. Even white Sikhs men and women wear Dastaars. Women must wear the turban as instructed by Guru Ji himself because that’s what makes them unique and an image of Guru Ji.

(ਰੁਤਿ 3, ਅੰਸੂ 22, ਜਿਲਦ 14, ਫੰਨਾ 3068)
In this Historic account the mention of Dastaar Rehat is clear. Having reached the spiritual state of “Param Hans” in this intoxicated state Mata Bhaag Kaur had stopped wearing clothes. When Guru Sahib ordered her to keep her body covered he specifically mentioned the Rehat of Dastaar as well. Was this Hukam necessary if Guru Sahib didn’t consider a Dastaar to be mandatory for both Sikh men and women? Not only did Guru Sahib order a Bibi at such a high Avastha to cover herself but to wear a Dastaar as well, putting the Dastaar at the same level as the Kachhera and the rest of the Kakkars ( Guru Sahib also mentions to wear a Kachhera in the Hukam).

Right up to the reign of Maharaja Ranjit Singh, Sikh women had been steadfast in following the edicts of the Satguru (True Guru) in respect to their spiritual inner life as well as dress, including the Dastaar. That is what J. D. Cunningham himself saw and wrote in the middle of the Nineteenth Century when he wrote his book, ‘History of the Sikhs’. He writes: “The Sikh women are distinguished from Hindus of their sex by some variety of dress but chiefly by a higher top knot of hair.” Even after the Panjab came under the British rule, the Dastaar was conspicuously seen in the case of Sikh women as well as men right up till the Gurdwara movement and the establishment of the Shiromani Gurudwara Prabandhak Committee in 1926. Until then, no one – men or women were allowed initiation (by taking Amrit) at Sri Akaal Takhat Sahib without a Dastaar. At the end of the nineteenth century and the beginning of the present one, as a result of the Sikh renaissance movement, a number of Khalsa schools for girls were established in Punjab. A small Dastaar was prescribed as an obligatory head dress for students as well as for teachers in such schools at Jaspalon, Ferozepur and Sidhwan in Punjab.

Many famous Rehatnaame also support wearing of Dastaar. Here are some quotes:

“…Waheguru Ji Ka Khalsa should keep hair unshorn, have flowing beard and have simple Dastaar which saves from impiety. Then the Sikhs asked what would happen to those Amritdhari who start cutting their hair or do not keep their hair covered. The Guru replied that they would be stupid and would lose their sensibility. It is a blemish to remain bareheaded…Always keep two turbans. When the bigger turban is removed, the smaller be kept. The smaller turban should not be removed.”
(Bijai Mukat Dharam Shastra – Sakhi-8)

It is thus, absolutely clear from the above quotations that remaining bareheaded at any time (except when washing, drying, and combing the hair) and keeping hair loose and unknotted are basically against the Sikh Code of Conduct, which is applicable to all, men and women alike. For obvious reasons, therefore, the use of Dastaar is indispensable. There is no other way to keep the head covered all the time. Sikh women who wear only dupattas, mostly remain bareheaded, especially in the privacy of their own homes, while taking food, etc., and thus are, perhaps unconsciously, infringing the Sikh Code of Conduct in this respect. 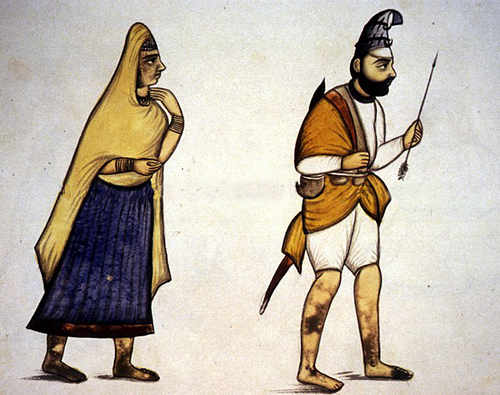 A 19th century painting of a Sikh man and his wife in Punjab by an English artist.