Did the Sikh Gurus perform miracles? If so, why?

Prophets and saints have performed miracles. A miracle is an extraordinary event which reason or science cannot explain. Science has not yet advanced so far as to explain everything. According to the scientists, miracles have nothing to do with holiness or piety. Miracles are “not happening against the laws of God, but are the results of superior powers which God bestows on His servants.” Men of God are able to do things which are beyond the understanding of the scientists’ limited reason.

According to Sikhi, occult powers come naturally through concentration on “The Naam”. Miracles should not be performed at the bidding of a king or a leader or to prove the greatness of one’s religion or to confirm the faith of people in a spiritual guide. Guru Raam Daas Ji says: “The desire to perform miracles is a worldly attachment and is an obstacle in the way of ‘The Naam’ residing in our hearts.”

The Sikh Gurus did perform miracles off and on, but they did so out of compassion or to set an erring person right. Guru Nanak made the bitter soap-nuts sweet near Pilibhit, to save Baba Mardana from death by starvation.

The Guru condemned miracles performed for personal glory. Baba Atal who performed a miracle had to give up his life as atonement for it. Guru Arjan and Guru Tegh Bahadur were requested to perform miracles so that their lives would be spared. They refused to do so and welcomed the penalty of death. The greatest miracle is not to perform a miracle, in spite of having the capacity to do so. As Emerson puts it: “Self-sacrifice is the real miracle out of which all the reported miracles flow.”

Guru Nanak was asked by the Sikhs about his supernatural powers. He answered: “I can do nothing against the law of God. It is only He who can perform a miracle. The ‘True Name’ is the miracle of miracles. I know of no other miracles.” Saintly people do not like to interfere with God’s Will by performing miracles. The Sikh Gurus never performed miracles to convince others about their faith or to save themselves from calamities or penalties. 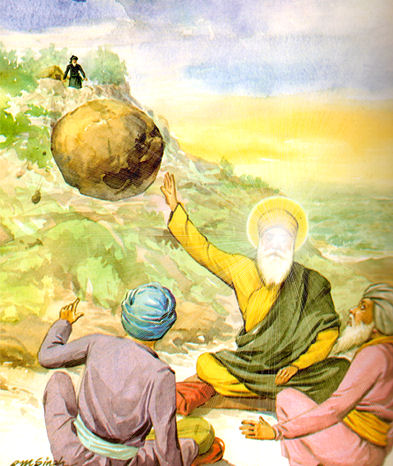