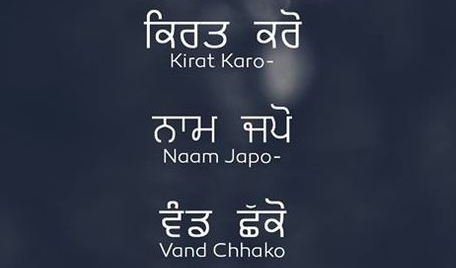 In the words of Bhai Vir Singh Ji, the Sikh brotherhood can be described with five words: “NAAM, DAAN, ISHNAAN, KIRAT KARNA AND VAND CHHAKNA.”

NAAM – Naming Him, The Secret of the personality that has no personal aims, ambitions, of selfishness. Selfishness is transcended by love. So by living in Him, by Naming him, by dying in him, in love of him, man attains his manhood, which is forever divine and unselfish.

The essential nature of the soul is unselfish. Realizing one’s soul first through Naam constitutes the life of this brotherhood. It is the maintenance of the spiritual attitude by physical effort while in this physical universe of incessant struggle.

DAAN – Giving. Giving away all one has, in spontaneous sympathy, infinite philosophic sorrow for the living, and in infinite but silent, unaggressive, unobtrusive, spontaneous zeal for doing good to the living, as does the rose in the river. It is an attitude of the elevated life that gives without knowing. As hotter objects impart heat to the colder objects around by the difference in potential, so does a Brother of the TressKont of Guru Gobind Singh give.

Daan, certainly, does not mean in the Guru’s Brotherhood the conscious contributions of charity, a giving of alms. “All belong to the Guru;” so does the Brother feel, and always “all is His, nothing is mine.” Such affectionate attitude never comes by any social codes or rules. It is nothing mechanical, it is deep and organic. This charity of the Brother flows like rivers out of his whole being. The Brother has foregone his self, his labour, his very flesh and blood, his life, and his soul, for the beloved master.

KIRAT KARNA – This is the symbolic phrase that knits Guru Gobind Singh’s Brotherhood with the whole humanity of labourers. The Guru has no rich man, no idle rich man in his brotherhood, – no place for him. All must labour , must sweat to create the foodstuffs, to create shapes out of iron, wood and stone, to work, to labour and then forego the fruits of labour. And in this spontaneous foregoing is the difference between the brother and the modern labourer.

VAND CHHAKNA – Equal distribution of the fruits of labour. “Partake not of that bread which thou has not split with thy brother”.

Guru Gobind Singh Ji is the Guru of the modern times. He is a Prophet who has reconstructed human society in this brotherhood of “Naam, Daan, Ishnaan, Kirat Karna, and Vand Chhakna.”