Can prayer change things or destiny?

Those who offer prayers sincerely, know the efficacy and value of prayer. Other people think that prayer may give consolation and peace to man but cannot affect physical events, because the universe is governed by law. If fire burns today, it will also burn tomorrow, in spite of the prayer. Life is regular and smooth because of these unchanging laws. Though saints and mystics may possess great powers. What we regard as a miracle may really only be the “power of prayer” or the “working of a spiritual law”. Sincere prayer is a supplication made to God generally without any personal motive. God knows of all the desires and sincerity of the individual. It is up to Him, to accept or reject a request made to Him.

Certain basic laws are interacted on by other laws. Aeroplanes fly, contrary to the laws of gravity, but in turn they are governed by the laws of aerodynamics.

Prayer may help in a psychological way, e.g. people who are made ill by fear or tension while the effect is physical the cause may be mental. In such a case prayer may also heal in the same way as medicine, but by removing the mental cause.

According to Sikhi, prayer can change man’s mind. Just as dirt is washed away by soap, in the same way man’s evil thoughts may be washed away by prayer and meditation. Sinners have turned into saints through the power of prayer. The example of Sajjan, the thug is well-known. Bhai Gurdas has cited the case of Queen Tara Lochan. Her lost sandals were restored to her by prayer.

Prayer is not mere auto-suggestion. At its best, it is concentrating on God and His qualities. God is goodness, truth, patience, peace, and love. When a man offers a prayer, God enters into his life and gives His qualities to the devotee. With such qualities and power, He can mould things. Others may regard such events as just coincidences, but people who understand recognize them as the effect of prayer: “More things are wrought by prayer than this world ever dreams of.”


15 year-old Veer Amritpal Singh, a native Kenyan with Bhai Manvir Singh. When Amritpal Singh was 7 years old a miracle happened to him at Kericho Gurdwara Sahib. As a young child he never had any teeth. One morning at Amrit-vela he did an Ardaas in front of Sri Guru Granth Sahib jee asking for teeth as the other children used to laugh and mock him. With Guru Sahib’s Grace his body froze like a rock as he lay on the floor in front of Guru jee. Knowing something mystical was happening the Giani Jee asked the few people sitting in the Darbaar Sahib to leave and closed the doors. Only Amritpal Singh and Guru Jee were left in the Darbaar Sahib. After an hour or so he got up from the ground. When the Sangat and Giani Jee entered the Darbaar Sahib again they discovered that Sri Guru Granth Sahib jee had performed a miracle by blessing Amritpal Singh with a full set of beautiful teeth. Courtesy of www.manvirsingh.blogspot.com 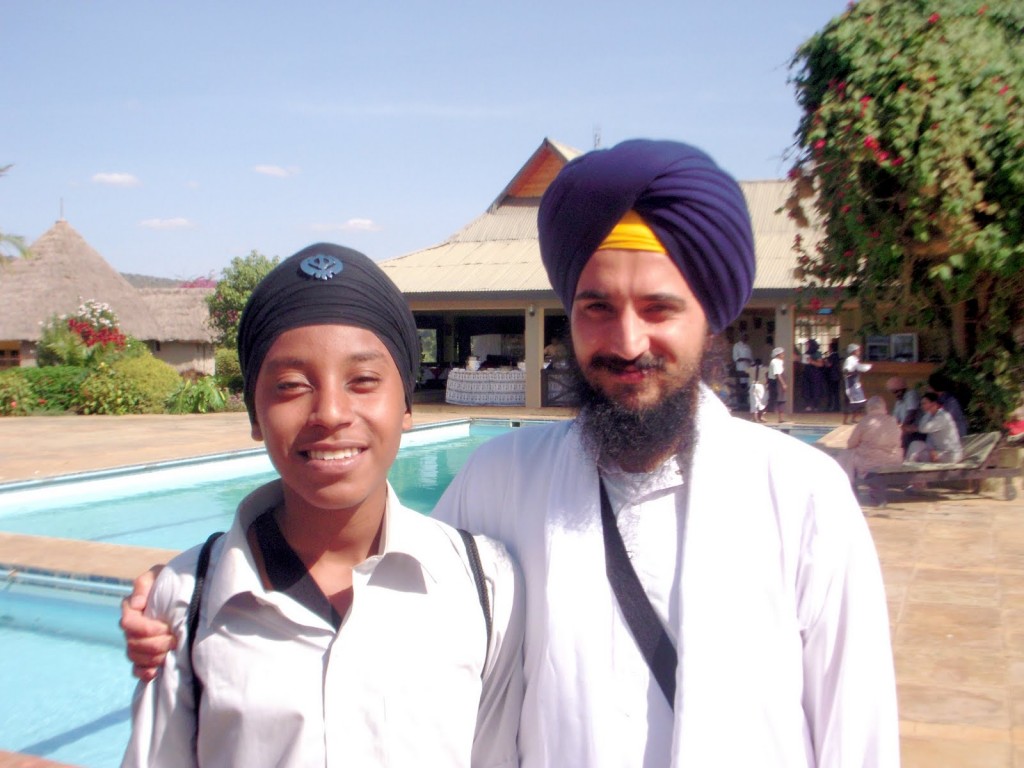