Can a non-amritdhari experience the ‘paaras-kalaa’ (philosopher’s stone touch) of Naam simran?

Normally ‘no’, but there are exceptions. People who have massive bhagti (accumulation of the profit of doing the devotional worship of Waheguru) from previous lives, sometimes get spiritual experiences by japping Naam (reciting the Divine-Name) or getting exposes to Naam vibrations before Amrit. But such Grace is short-lived and one can never get full potential of Gurmat Naam (the Divine Name as per the Guru’s instruction) without japping Naam through the Guru i.e. after receiving Amrit.

We see in the story of Doctor Gurdit Singh of Burma, who’s sister experienced spiritual ecstasy before receiving Amrit from the Panj Pyaare. Her brother, who attained the full spiritual stage of ‘jyot vigaas’ (Revelation of The Light of the Almighty) right at the time of receiving Amrit, wished that his sister who was sitting outside and had not been accepted as a candidate for Amrit, too get this experience. She was in great bairaag (feeling sad and longing for something) and was sitting outside the Amrit Sanchaar Darbaar. Right at that moment when Dr. Sahib wished that his sister experience spiritual ecstasy that he was experiencing, a thought came in the minds of all Panj Pyaare at the same time, that they allow his sister to have darshan of her brother who was coloured in the divine colours of Naam. They lifted Dr Sahib, who was in samaadhi and brought him by the window and opened the window. His sister beheld him from outside and as soon as she had his darshan (blessed sight) and as she saw his divinely radiant face, she lost her worldly consciousness and Naam Khanda (continuous repetition of Naam) inside her started moving in full force. She had not even received Amrit. She was japping Naam or you can say that Naam Khanda was moving inside her body in full vigour.

Dr. Sahib stayed drenched in these divine colours for long time. Many hours after the Amrit Sanchaar samaagam ended the Sangat requested Bhai Sahib Randhir Singh jee (who too was one of the Panj Pyaare) to make Dr. Sahib aware i.e. bring him back to consciousness as they wished to have his darshan. Bhai Sahib reluctantly took his surthee (consciousness) in the same mandals (spiritual realm) as Dr. Sahib and from there brought him back to Sehaj Avastha (spiritual state of poise) and this way the Sangat had darshan of Dr. Sahib. 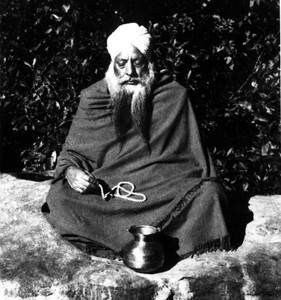